With the proliferation of IoT devices used in organizations to support business, technology and operations innovation, respondents to an Ponemon Institute study were asked to evaluate their perception of IoT risks, the state of current third party risk management programs, and governance practices being employed to defend against IoT-related cyber attacks.

Has your organization experienced a data breach or cyber attack caused by unsecured IoT devices or applications in the past 12 months?

This year’s report uncovered an alarming number of respondents who believe their organization will suffer from a catastrophic IoT related attack in the next two years, and shows that many are not properly assessing for third party IoT risks and do not have an accurate inventory of IoT devices. Similar to last year, the report underscores a major disconnect when it comes to third party IoT risk management practices and reveals that many companies have fallen behind on the basics such as assigning accountability and managing inventory over IoT.

The report addresses uncertainties around who is responsible for managing and mitigating third party risks and reveals an over-reliance on third party contracts and policies for IoT risk management. It concludes that current focus is on monitoring internal workplace IoT risks rather than on IoT risks posed by third parties.

The Ponemon Institute surveyed 605 individuals who participate in corporate governance and/or risk oversight activities to determine the following:

The gap between internal and third party IoT monitoring is substantial 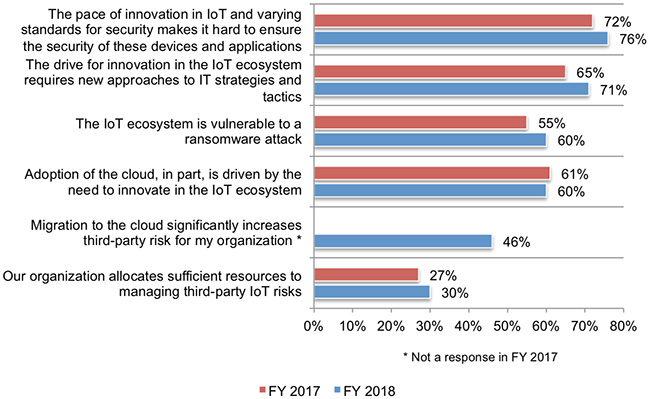 “The rapid adoption of IoT devices and applications is not slowing down and organizations need to have a clear understanding of the risks these devices pose both inside their own and outside their extended networks,” said Charlie Miller, Senior Vice President with the Shared Assessments Program. “With the increasing number of major data breaches, ransomware, and DDoS attacks in the news daily, and senior executives losing their jobs as a result, it’s critical that organizations assign accountability and ownership of IoT-related oversight across their organization, ensure that IoT security is taken seriously and educate management at all levels.”

“The good news is that some companies are becoming more aware of third party cyber risks and are actually implementing third party risk management programs. The bad news is that many organizations continue to struggle with the security risks posed by IoT, and are therefore not prepared to deal with the catastrophic consequences of a breach,” said Dr. Larry Ponemon, Chairman of the Ponemon Institute. “To more effectively address IoT risks and improve third party risk management programs, companies should take proactive steps to identify and replace inadequate IoT devices, assign accountability for monitoring the use and deployment of IoT devices, and collaborate with appropriate parties to find successful techniques to manage and mitigate third party IoT device and application risks.”