While a majority of the US public sees companies’ ability to keep data private as absolutely key, it has little trust in companies to do so. In fact, only 20 percent of them “completely trust” organizations they interact with to maintain the privacy of their data, the results of a recent survey have shown.

They are also much more worried about hackers accessing their data than companies using it for purposes they have not agreed to: 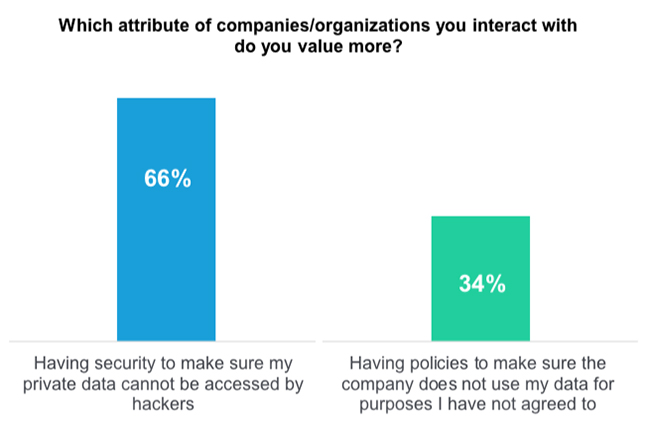 The online survey of 10,000 consumers, conducted by the Harris Poll on behalf of IBM, includes answers from consumers around the world (the US, the UK, Germany, Brazil, China, India and the United Arab Emirates).

Among the more interesting results are:

Most of the respondents (85%) believe businesses should be doing more to actively protect consumers against cybersecurity threats, and 71% says that given the lack of success businesses are having when it comes to cybersecurity, it’s appropriate for government to step in.

That last percentage is highest for respondents from the UK, China and India, 83% of whom believe government intervention in these cases is appropriate.

77% of the pollees say that these days, they think about whether they trust a company to keep their information safe before they buy something from them. 75% of them said that if they don’t trust a company to protect their data they won’t buy from them no matter how great their products are.

In all markets, cybersecurity (63%) is second only to product quality (70%) when it comes to decision drivers. It’s not just an under-the-hood operational function, it is part of how companies are judged in the consumer marketplace.

54% of the respondents say that their decision to do business with a company or not is also influenced by the quality of their employees and leadership, and 48% that they care about how the company engages in communities and with the environment.

Finally, most users would like to see the companies they are doing business with respond quickly to a cybersecurity breach: to quickly fix the problem to stop the breach (73%), to stop further damage (73%), and to report the breach (71%). 67% says that companies covering customer costs for using a
third party to protect identities in the wake of a breach is important.

The poll underscores the public’s view of the obligation that organizations have to handle data responsibly and protect it from hackers.

“Increasingly, we are seeing companies around the world trying to balance providing personalized services to consumers, while maintaining privacy,” said John Kelly, IBM Senior Vice President, Cognitive Solutions. “Getting this right requires companies working closely with each other and, importantly, with governments, to ensure the right protections are in place.”