“Real-time cyber threat intelligence is more critical than ever as cybercriminals continue to find new attack vectors — like encrypted and chip-based attacks,” said Chad Sweet, CEO at The Chertoff Group. “To stay protected in the cyber arms race, organizations must use every tool in their security toolbox, particularly technology that delivers the necessary visibility to enhance an organization’s security posture.”

On a month-to-month basis in 2018, malware volume remained consistent in the first quarter before dropping to less than 1 billion per month across April, May and June. These totals were still more than double that of 2017.

Ransomware back in big way 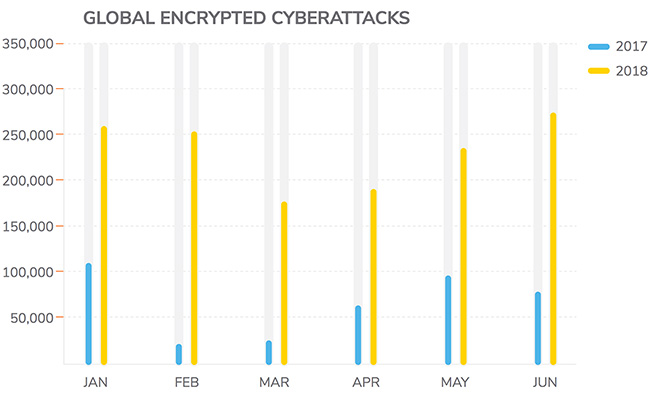 Cybercriminals are strategically following this trend to help prevent their malicious payloads from being discovered. Encrypted attacks increased 275 percent when compared to this time in 2017.

“Encrypted attacks are a critical challenge in the industry,” said SonicWall CEO Bill Conner. “Far too few organizations are aware that cybercriminals are using encryption to circumvent traditional networks security controls, and others aren’t activating new mitigation techniques, such Deep Packet Inspection of SSL and TLS traffic (DPI-SSL). We predict encrypted attacks to increase in scale and sophistication until they become the standard for malware delivery. And we’re not that far off.”