The worldwide market for 3D-printed parts is a $5 billion business with a global supply chain involving the internet, email, and the cloud – creating a number of opportunities for counterfeiting and intellectual property theft. 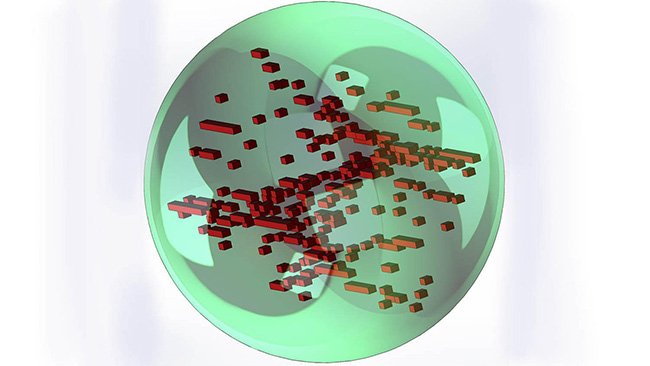 Flawed parts printed from stolen design files could produce dire results: experts predict that by 2021, 75 percent of new commercial and military aircraft will fly with 3D-printed engine, airframe, and other components, and the use of AM in the production of medical implants will grow by 20 percent per year over the next decade.

A team at NYU Tandon School of Engineering has found a way to prove the provenance of a part by employing QR (Quick Response) codes in an innovative way for unique device identification. In the latest issue of Advanced Engineering Materials, the researchers describe a method for converting QR codes, bar codes, and other passive tags into three-dimensional features hidden in such a way that they neither compromise the part’s integrity nor announce themselves to counterfeiters who have the means to reverse engineer the part.

Gupta’s team developed a scheme that “explodes” a QR code within a computer-assisted design (CAD) file so that it presents several false faces — dummy QR tags — to a micro-CT scanner or other scanning device. Only a trusted printer or end user would know the correct head-on orientation for the scanner to capture the legitimate QR code image.

“By converting a relatively simple two-dimensional tag into a complex 3D feature comprising hundreds of tiny elements dispersed within the printed component, we are able to create many ‘false faces,’ which lets us hide the correct QR code from anyone who doesn’t know where to look,” Gupta said.

The team tested different configurations — from distributing a code across just three layers of the object, to fragmenting the code into up to 500 tiny elements — on thermoplastics, photopolymers, and metal alloys, with several printing technologies commonly employed in the industry.

Chen, the study’s lead author, said that after embedding QR codes in such simple objects as cubes, bars, and spheres, the team stress-tested the parts, finding that the embedded features had negligible impact on structural integrity.

“To create typical QR code contrasts that are readable to a scanner you have to embed the equivalent of empty spaces,” she explained. “But by dispersing these tiny flaws over many layers we were able to keep the part’s strength well within acceptable limits.”

Tsoutsos and Maniatakos explored threat vectors to determine which AM sectors are best served by this security technology, a step that Gupta said was crucial in the research.

“You need to be cost-efficient and match the solution to the threat level,” he explained. “Our innovation is particularly useful for sophisticated, high-risk sectors such as biomedical and aerospace, in which the quality of even the smallest part is critical.”