According to the IDC Worldwide Quarterly Security Appliance Tracker, the total security appliance market experienced positive unit shipment and revenue growth for the second quarter of 2018. 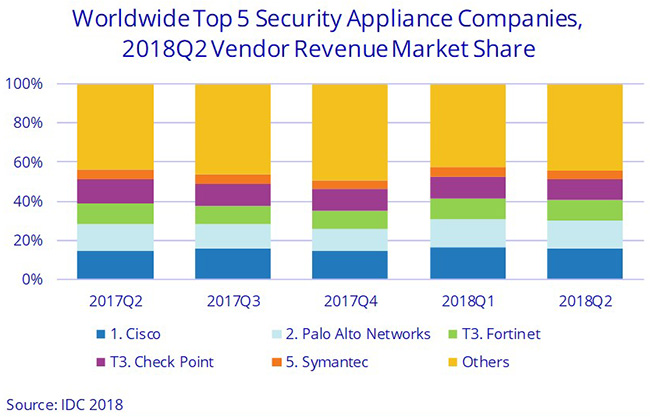 The Unified Threat Management (UTM) sub-market continues to drive the worldwide market with revenue increasing by 9.6% quarter over quarter and 16.5% year over year to reach $1.9 billion in the second quarter of 2018. UTM now comprises 52.9% of the total security appliance market.

Central & Eastern Europe had the highest growth in EMEA, with revenue increasing by 11.5% quarter over quarter and 16.9% year over year. UTM continues to push most of the growth in the U.S. and Europe, while firewall continues to see strong adoption in APeJ.

“The second quarter of 2018 extends the continued strong growth for network security with consistent double-digit growth year over year across the top vendors. Firewall and UTM are the strongest areas of growth as network refreshes drive perimeter security refreshes and as vendors add new features and improve performance across all product lines,” said Robert Ayoub, program director, Security Products.