Based on trends in the first half of 2018, Webroot found that cybercriminals are shifting to increasingly sophisticated and targeted means of attack while also expanding their money making endeavors, as shown by the uptick in cryptojacking and cryptomining. 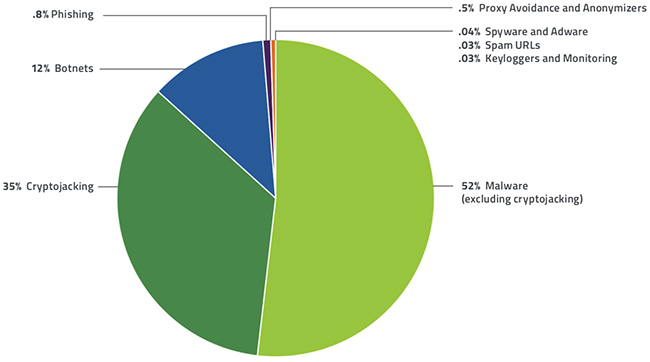 There has been a massive shift from ransomware to cryptomining

Cryptojacking scripts are on the rise

Criminals are seeking out unsecured Remote Desktop Protocol (RDP) connections as an attack vector, both to access and infect systems and to perform reconnaissance. Criminals can also buy access to systems known to have unsecured RDP on the dark web.

Businesses are realizing the necessity for security awareness training programs

Due to the large numbers of cybersecurity threats in 2018, employee security awareness is becoming a key component in organizations’ security strategy. Research proves that risk decreases as more security awareness training and phishing attack simulations are implemented:

“Cybercriminals display an amazing ability to adapt to maximize their profits. Businesses need to adopt the same nimble mindset toward their cybersecurity. They need to continually reassess risks, adopt a multi-layered approach, and, ultimately, educate their employees about the latest threats on an ongoing basis,” said Tyler Moffitt, Senior Threat Research Analyst, Webroot.