Police forces across the UK are coming under increasing pressure to launch criminal investigations into incidents of social media and computer hacking, according to a new report from the Parliament Street think tank. The news comes as senior Police Chiefs have warned that budget cuts and limited resources are leading to an increase in violent crime across the country. 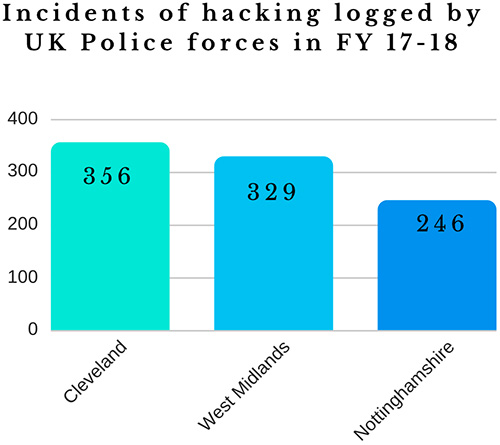 The new research paper, reveals that 14 police forces have launched a total of 2,547 investigations into reports of computer and social media hacking over the last two financial years, according to data obtained under the Freedom of Information (FOI) Act. The data showed a rise of 14 per cent, from 1,181 incidents in 2016/17 to 1,354 in 2017/18. The Parliament Street think tank also released the relevant Police notes on the incidents in question, providing further context.

In the most recent financial year, Cleveland Police was reported the most incidents of hacking, with a total of 356 reports recorded. This was followed by Nottinghamshire Police which reported 246 cases of hacking.

“It’s clear that the tidal wave of cybercrime is draining the resources of police forces as well as businesses. Tackling this problem requires a concerted effort to recruit staff equipped with the latest cyber skills as well as extending education and training opportunities to existing employees. As part of this effort, it’s vital that industry works more closely with academic institutions, to develop specialist flexible courses, so that skills within workforces increase dramatically,” said Sheila Flavell, Chair of the Institute of Coding and COO of FDM Group.

In addition to the data, Parliament Street obtained copies of police notes for several forces, describing the nature of the incidents under investigation. Some key findings include: