While tried-and-true attack methods are still going strong, new threats emerge daily, and new vectors are being tested by cybercriminals, according to the 2019 Webroot Threat Report.

Home user devices are more than twice as likely to get infected as business devices. Sixty-eight percent of infections are seen on consumer endpoints, versus 32 percent on business endpoints.

Phishing attacks increased 36 percent, with the number of phishing sites growing 220 percent over the course of 2018. Phishing sites now use SSL certificates and HTTPS to trick internet users into believing they are secure, legitimate pages. Seventy-seven percent of phishing attacks impersonated financial institutions, and were much more likely to use HTTPS than other types of targets. In fact, for some of the targeted financial institutions, over 80 percent of the phishing pages used HTTPS. Google was found to be the most impersonated brand in phishing overall.

Nearly a third of malware tries to install itself in %appdata% folders. Although malware can hide almost anywhere, Webroot found several common locations, including %appdata% (29.4 percent), %temp% (24.5 percent), and %cache% (17.5 percent), among others. These locations are prime for hiding malware because these paths are in every user directory with full user permissions to install there. These folders also are hidden by default on Windows Vista and up.

Devices that use Windows 10 are at least twice as secure as those running Windows 7. Webroot has seen a relatively steady decline in malware on Windows 10 machines for both consumer and business.

“We wax poetic about innovation in the cybersecurity field, but you only have to take one look at the stats in this year’s report to know that the true innovators are the cybercriminals. They continue to find new ways to combine attack methods or compromise new and existing vectors for maximum results. My call to businesses today is to be aware, assess your risk, create a layered approach that protects multiple threat vectors and, above all, train your users to be an asset—not a weak link—in your cybersecurity program,” said Hal Lonas, CTO, Webroot. 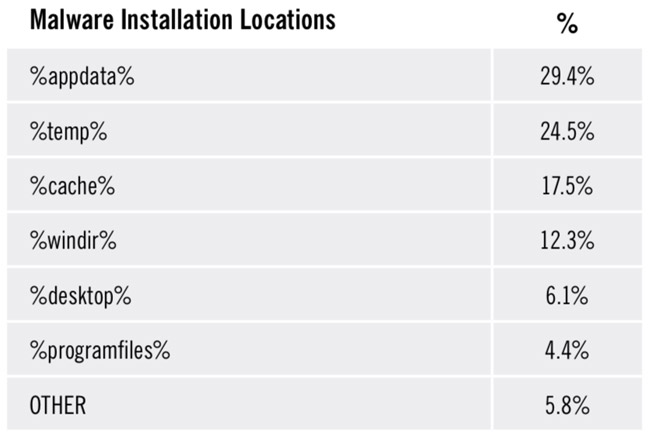 Despite the decrease in cryptocurrency prices, cryptomining and cryptojacking are on the rise. The number of cryptojacking URLs Webroot saw each month in the first half of the year more than doubled in the period from September through December 2018. These techniques can be more lucrative than ransomware attacks, since they don’t require waiting for the user to pay the ransom, and they have a smaller footprint. As far as web-based cryptojacking, Coinhive still dominates with more than 80 percent market share, though some new copycat cryptojacking scripts are gaining in popularity.

While ransomware was less of a problem in 2018, it became more targeted. We expect major commodity ransomware to decline further in 2019; however, new ransomware families will emerge as malware authors turn to more targeted attacks, and companies will still fall victim to ransomware. Many ransomware attacks in 2018 used the Remote Desktop Protocol (RDP) as an attack vector, leveraging tools such as Shodan to scan for systems with inadequate RDP settings. These unsecured RDP connections may be used to gain access to a given system and browse all its data as well as shared drives, providing criminals enough intel to decide whether to deploy ransomware or some other type of malware.