Cybercriminals target people, rather than systems and infrastructure, to install malware, initiate fraudulent transactions, steal data, and more, according to Proofpoint. 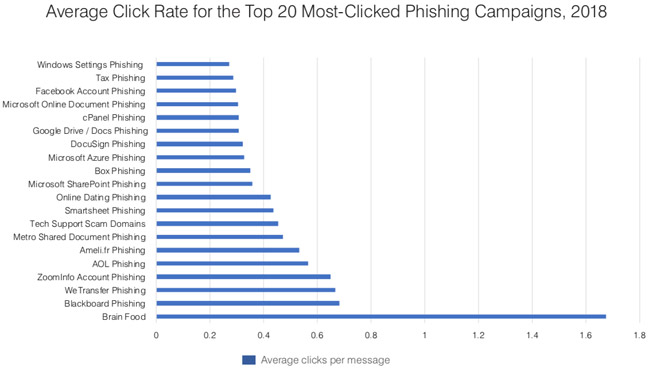 “More than 99 percent of cyberattacks rely on human interaction to work—making individual users the last line of defense. To significantly reduce risk, organizations need a holistic people-centric cybersecurity approach that includes effective security awareness training and layered defenses that provide visibility into their most attacked users.”

Attackers target people – and not necessarily traditional VIPs. They often target Very Attacked People (VAPTM) located deep within the organization. These users are more likely to be targets of opportunity or those with easily searched addresses and access to funds and sensitive data.

Malware actors are less likely to follow expected email traffic. Overall malicious message volumes sampled in the second quarter of 2019 were distributed more evenly over the first three days of the week and were also present in significant volumes in campaigns that began on Sundays (more than 10 percent of total volume sampled).

Click times have traditionally shown significant regional differences, reflecting differences in work culture and email habits among major global regions. Asia-Pacific and North American employees are far more likely to read and click early in the day, while Middle Eastern and European users are more likely to click mid-day and after lunch. 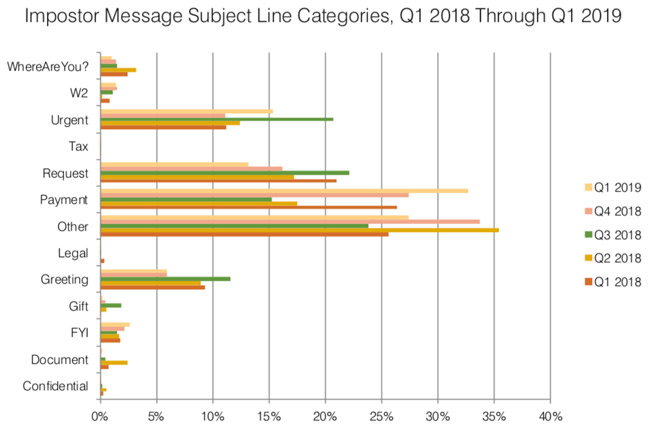 2018 saw impostor attacks at their highest levels in the engineering, automotive, and education industries, averaging more than 75 attacks per organization. This is likely due to supply chain complexities associated with the engineering and automotive industries, and high-value targets and user vulnerabilities, especially among student populations, in the education sector.

In the first half of 2019, the most highly targeted industries shifted to financial services, manufacturing, education, healthcare, and retail.

The Chalbhai phish kit, the third most popular lure for the first half of 2019, targeted credentials for many top U.S. and international banks and telecommunications companies, among others, using a range of templates attributed to a single group but leveraged by multiple actors.

Attackers capitalize on human insecurity. The most effective phishing lures in 2018 were dominated by “Brainfood,” a diet and brain enhancement affiliate scam that harvests credit cards. Brainfood lures had click rates over 1.6 clicks per message, over twice as many clicks as the next most clicked lure.