Coming off of a year of major data breaches making headline news, it’s easy to draw the conclusion that security teams are losing the cybersecurity battle, a DomainTools survey reveals. 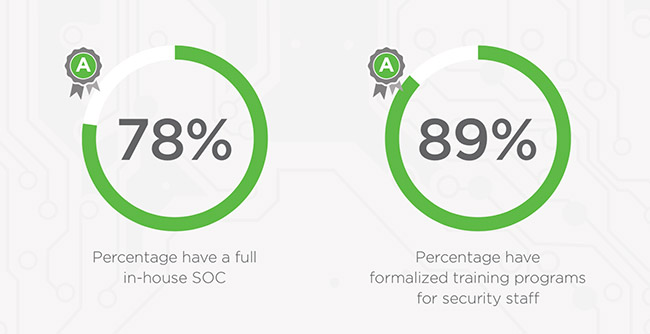 Security pros are reporting real progress being made as confidence in their programs continues to grow: Thirty percent of respondents gave their program an “A” grade this year, doubling over two years from 15 percent in 2017. Less than four percent reported a “D” or “F”.

Security breaches among those surveyed are also continuing to decline year-over-year. The percentage of organizations that indicate they have been breached in the past 12 months has dropped from 26 percent in 2017 to 15 percent in 2019, according to the findings.

The report also validates that automation is “working” and is playing an increasingly important role in securing these organizations.

“Cyber threats remain relentless and continue to evolve in complexity, so it is reassuring to see that the confidence of security teams in their security posture is growing in parallel with their success in defending against the latest attacks.

“It is also exciting to see the results of investments in automation and in-house SOCs paying off as the key components of driving this progress forward,” said Tarik Saleh, Senior Security Engineer & Malware Researcher. “Unfortunately, security teams report they are more short-staffed than ever, with the need for more staff as the number one hurdle to achieving an ‘A’ grade in 2019, overtaking budget issues from previous years.”

In-house SOC: More than half (53%) of organizations now carry out security operations with a full in-house SOC, up 10 percent over 2017. Grade “A” respondents overwhelmingly rely on in-house SOC to keep their grades high, with 78 percent reporting on their implementation.

Automation: Automation is playing an increasingly important role in securing organizations, with 88 percent strongly agreeing or agreeing that automation has improved their staff’s technical skills and general knowledge of cybersecurity.

Also, malware, spearphishing, and business email compromise are the three most predominant forms of attack, with ransomware and DDoS both showing 10 percent declines since 2017. Security teams remain confident for now, we’ll see how the evolution of these threats will impact their decision-making in 2020.