There’s a severe lack of U.S. government .GOV validation and HTTPS encryption among county election websites in 13 states projected to be critical in the 2020 U.S. Presidential Election, a McAfee survey reveals. 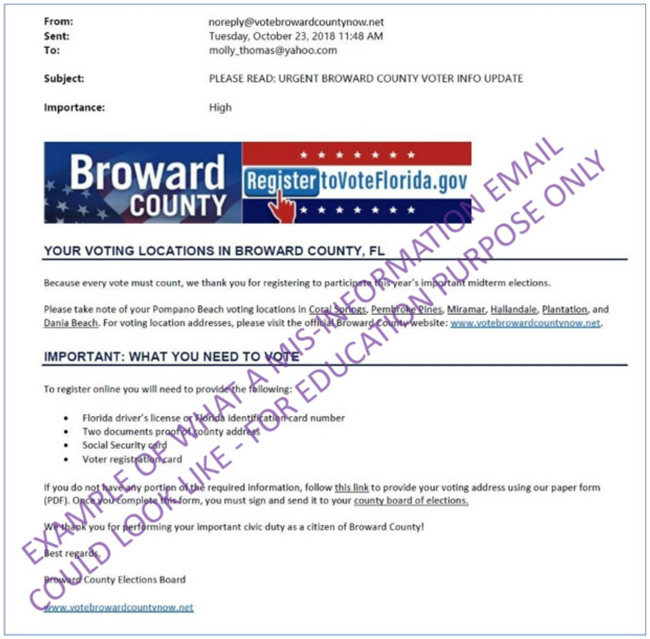 The survey found that as many as 83.3% of these county websites lacked .GOV validation across these states, and 88.9% and 90.0% of websites lacked such certification in Iowa and New Hampshire respectively.

Such shortcomings could make it possible for malicious actors to establish false government websites and use them to spread false election information that could influence voter behavior and even impact final election results.

“An adversary can use fake election websites for misinformation and voter suppression by targeting specific voters in swing states with misleading information on candidates, or inaccurate information on the voting process such as poll location and times.

“In this way, this malicious actor could impact election results without ever physically or digitally interacting with voting machines or systems.”

Government entities purchasing .GOV web domains have submitted evidence to the U.S. government that they truly are the legitimate local, county, or state governments they claimed to be.

Websites using .COM, .NET, .ORG, and .US domain names can be purchased without such validation, meaning that there is no governing authority preventing malicious parties from using these names to set up and promote any number of fraudulent web domains mimicking legitimate county government domains.

The HTTPS encryption measure assures citizens that any voter registration information shared with the site is encrypted, and that they can give greater confidence in the entity with which they are sharing that information.

“In many cases, these websites have been set up to provide a strong user experience versus a focus on the implications that they could be spoofed to exploit the communities they serve,” Grobman continued.

“Malicious actors can pass off fake election websites and mislead large numbers of voters before detection by government organizations. A campaign close to election day could confuse voters and prevent votes from being cast, resulting in missing votes or overall loss of confidence in the democratic system.”

Of the 1,117 counties in the survey group, 83.3% of their websites lack .GOV validation. Minnesota ranked the lowest among the surveyed states in terms of .GOV website validation with 95.4% of counties lacking U.S. government certification.

Arizona had the highest percentage of main county websites validated by .GOV with 66.7% coverage, but even this percentage suggests that a third of the Grand Canyon State’s county websites are unvalidated and that hundreds of thousands of voters could still be subjected to disinformation schemes.

The survey found that 46.6% of county websites lack HTTPS encryption. Texas ranked the lowest in terms of encryption with 77.2% of its county websites failing to protect citizens visiting these web properties. Other states with counties lacking in encryption included Pennsylvania (46.3%), Minnesota (42.5%), and Georgia (38.4%).

Assessment of Iowa and New Hampshire

The research found that some states attempted to establish standard naming standards, such as www.co.[county name].[two-letter state abbreviation].us. Unfortunately, these formats were followed so inconsistently that a voter seeking election information from her county website cannot be confident that a web domain following such a standard is indeed a legitimate site.

The research found 103 cases in which counties set up easy-to-remember, user-friendly domain names to make their election information easier to remember and access for the broadest possible audience of citizens.

While 93 of these counties (90.2%) protected voters visiting these sites with encryption, only two validated these special domains and websites with .GOV. This suggests that malicious parties could easily set up numerous websites with similarly named domains to spoof these legitimate sites.

Strategies for transitioning to .GOV

While only 19.3% of Ohio’s 88 county main websites have .GOV validation, the state leads McAfee’s survey with 75% of county election websites and webpages validated by .GOV certification. This leadership position appears to be the result of a state-led initiative to transition county election-related content to .GOV validated web properties.

Such a .GOV transition strategy constitutes an interim solution until more comprehensive efforts are made at the state and federal government level through initiatives such as The DOTGOV Act of 2020. This legislation would require the Department of Homeland Security (DHS) to support .GOV adoption for local governments with technical guidance and financial support.

“Ohio has made a commendable effort to lead in driving election websites to .GOV, either directly or by using the state run ohio.gov domain,” said Grobman.

“While main county websites still largely lack .GOV validation, Ohio does provide a mechanism for voters to quickly assess if the main election website is real or potentially fake. Other states should consider such interim strategies until all county and local websites with election functions can be fully transitioned to .GOV.”