COVID-19 has had a massive effect on DevOps, leading to large-scale migrations away from on-premises environments, a Codefresh survey reveals. 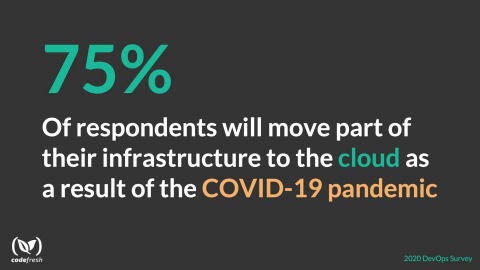 At the same time, DevOps automation continues to expand in scope and complexity with more and more processes becoming automated, and more involved technologies like Kubernetes continuing to gain strong traction. While it has improved some year-over-year, most organizations are still struggling with implementing and maintaining automation.

In total, about 75% of respondents said that they are moving at least part of their infrastructure to the cloud as a result of the COVID-19 pandemic, representing a dramatic shift in strategy and further adoption towards the cloud.

DevOps budgets are going up in 2020

Organizations are continuing to invest heavily in their DevOps budgets as the effect of DevOps on developer velocity and site reliability continues to be better understood.

If your organization is struggling with complete commit-to-production automation, you’re not alone. Automation proves to be elusive as less than 5% of respondents claimed that all of their company’s DevOps processes are automated from Git commit to code running in production.

This highlights the importance of choosing a well-architected DevOps automation stack, as the platform you use can have a massive impact on the amount of time lost to bug fixing.