More and more security professionals are realizing that it’s impossible to fully secure a Windows machine – with all its legacy components and millions of potentially vulnerable lines of code – from within the OS. With attacks becoming more sophisticated than ever, hypervisor-based security, from below the OS, becomes a necessity.

Unlike modern OS kernels, hypervisors are designed for a very specific task. Their code is usually very small, well-reviewed and tested, making them very hard to exploit. Because of that, the world trusts modern hypervisors to run servers, containers, and other workloads in the cloud, which sometimes run side-by-side on the same physical server with complete separation and isolation. Because of that, companies are leveraging the same trusted technology to bring hardware-enforced isolation to the endpoint.

It allows administrators to apply policies that force untrusted web sites and documents to be opened in isolated Hyper-V containers, completely separating potential malware from the host OS. Malware running in such containers won’t be able to access and exfiltrate sensitive files such as corporate documents or the users’ corporate credentials, cookies, or tokens.

With Application Guard for Edge, when a user opens a web site that was not added to the allow-list, he is automatically redirected to a new isolated instance of Edge, continuing the session there. This isolated instance of Edge provides another, much stronger, sandboxing layer to cope with web threats. If allowed by the administrator, files downloaded during that session can be accessed later from the host OS. 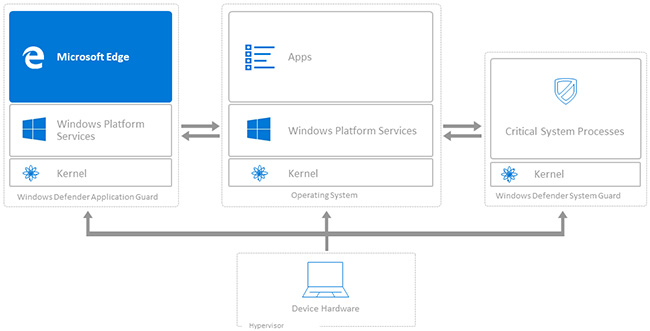 With Application Guard for Office, when a user opens an unknown document, maybe downloaded from the internet or opened as an email attachment, the document is automatically opened in an isolated instance of Office.

Until now, such documents would be opened in “protected view”, a special mode that eliminates the threat from scripts and macros by disabling embedded code execution. Unfortunately, this mode sometimes breaks legit files, such as spreadsheets that contain harmless macros. It also prevents users from editing documents.

Many users blindly disable the “protected view” mode to enable editing, thereby allowing malware to execute on the device. With Application Guard for Office, users don’t compromise security (the malware is trapped inside the isolated container) nor productivity )the document is fully functional and editable inside the container).

While Application Guard works well with Edge and Office, it doesn’t support other applications. Edge will always be the browser running inside the container. That means, for example, no Google accounts synchronization, something that many users probably want.

What about downloaded applications? Applications are not allowed to run inside the container. (The container hardening contains some WDAC policies that allow only specific apps to execute.) That means that users can execute those potentially malicious applications on the host OS only.

Administrators who don’t allow unknown apps on the host OS might reduce users’ productivity and increase frustration. This is probably more prominent today, with so many people working from home and using a new wave of modern collaboration tools and video conferencing applications.

Users who are invited to external meetings sometimes need to download and run a client that may be blocked by the organization on the host OS. Unfortunately, it’s not possible to run the client inside the container either, and the users need to look for other solutions.

Even with Office alone, there might be problems. Many organizations use Office add-ons to customize and streamline the end-user experience. These add-ons may integrate with other local or online applications to provide additional functionality. As Application Guard runs a vanilla Office without any customizations, these add-ons won’t be able to run inside the container.

For the networking isolation configuration, administrators have to provide a manual list of comma-separated IPs and domain names. It’s not possible to integrate with your already fully configured web-proxy. It’s also not possible to integrate with category-based filtering systems that you might also have. Aside from the additional system to manage, there is no convenient UI or advanced capabilities (such as automatic filtering based on categories) to use. To make it work with Chrome or Firefox, administrators also need to perform additional configurations, such as delivering browser extensions.

This is not a turnkey solution for administrators and it requires messing with multiple configurations and GPOs until it works.
In addition, other management capabilities are very limited. For example, while admins can define whether clipboard operations (copy+paste) are allowed between the host and the container, it’s not possible to allow these operations only one way and not the other. It’s also not possible to allow certain content types such as text and images, while blocking others, such as binary files.
OS customizations and additional software bundlings such as Edge extensions and Office add-ins are not available either.

While Office files are opened automatically in Application Guard, other file types aren’t. Administrators that would like to use Edge as a secure and isolated PDF viewer, for example, can’t configure that.

As stated before, Application Guard doesn’t protect against malicious files that were mistakenly categorized to be safe by the user. The user might securely download a malicious file on his isolated Edge but then choose to execute it on the host OS. He might also mistakenly categorize an untrusted document as a corporate one, to have it opened on the host OS. Malware could easily infect the host due to user errors.

Application Guard containers leverage the Windows Internet Connection Sharing (ICS) feature, to fully share networking with the host. That means that malware running inside the container might be able to attack some sensitive corporate resources that are accessible by the host (e.g., databases and data centers) by exploiting network vulnerabilities.

While Application Guard tries to isolate web and document threats, it doesn’t provide isolation in other areas. As mentioned before, Application Guard can’t isolate non-Microsoft applications that the organization chooses to use but not trust. Video conferencing applications, for example, have been exploited in the past and usually don’t require access to corporate data – it’s much safer to execute these in an isolated container.

External device handling is another risky area. Think of CVE-2016-0133, which allowed attackers to execute malicious code in the Windows kernel simply by plugging a USB thumb drive into the victim’s laptop. Isolating unknown USB devices can stop such attacks.

Wouldn’t it be great if users could easily open any risky document in an isolated environment, e.g., through a context menu? Or if administrators could configure any risky website, document, or application to be automatically transferred and opened in an isolated environment? And maybe also to have corporate websites to be automatically opened back on the host OS, to avoid mixing sensitive information and corporate credentials with non-corporate work?

How about automatically attaching risky USB devices to the container, e.g., personal thumb drives, to reduce chances of infecting the host OS? And what if all that could be easy for administrators to deploy and manage, as a turn-key solution in the cloud?