SIEM and SOAR solutions are important tools in a cybersecurity stack. They gather a wealth of data about potential security incidents throughout your system and store that info for review. But just like nerve endings in the body sending signals, what good are these signals if there is no brain to process, categorize and correlate this information? 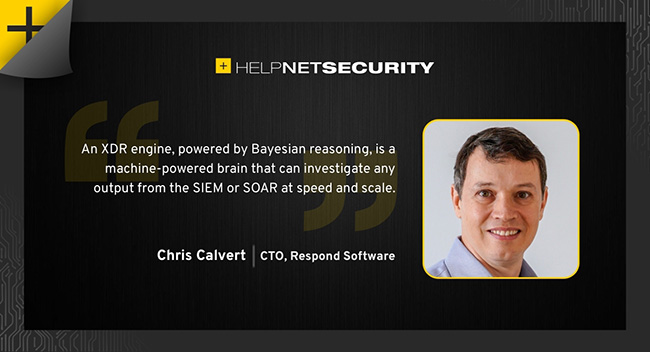 A vendor-agnostic XDR (Extended Detection and Response) solution is a necessary component for solving the data overload problem – a “brain” that examines all of the past and present data collected and assigns a collective meaning to the disparate pieces. Without this added layer, organizations are unable to take full advantage of their SIEM and SOAR solutions.

So, how do organizations implement XDR? Read on.

It’s easy for solutions with acronyms to cause confusion. SOAR and SIEM are perfect examples, as they are two very different technologies that often get lumped together. They aren’t the same thing, and they do bring complementary capabilities to the security operations center, but they still don’t completely close the automation gap.

The SIEM is a decades-old solution that uses technology from that era to solve specific problems. At their core, SIEMs are data collection, workflow and rules engines that enable users to sift through alerts and group things together for investigation.

In the last several years, SOAR has been the favorite within the security industry’s marketing landscape. Just as the SIEM runs on rules, the SOAR runs on playbooks. These playbooks let an analyst automate steps in the event detection, enrichment, investigation and remediation process. And just like with SIEM rules, someone has to write and update them.

Because many organizations already have a SIEM, it seemed reasonable for the SOAR providers to start with automating the output from the SIEM tool or security platform console. So: Security controls send alerts to a SIEM > the SIEM uses rules written by the security team to filter down the number of alerts to a much smaller number, usually 1,000,000:1 > SIEM events are sent to the SOAR, where playbooks written by the security team use workflow automation to investigate and respond to the alerts.

The verdict is that SOARs and SIEMs purport to perform all the actions necessary to automate the screening of alerts, but the technology in itself cannot do this. It requires trained staff to bring forth this capability by writing rules and playbooks.

Coming back to the analogy, this data can be compared to the nerves flowing through the human body. They fire off alerts that something has happened – alerts that mean nothing without a processing system that can gather context and explain what has happened.

Giving the nerves a brain

What the nerves need is a brain that can receive and interpret their signals. An XDR engine, powered by Bayesian reasoning, is a machine-powered brain that can investigate any output from the SIEM or SOAR at speed and scale. This replaces the traditional Boolean logic (that is searching for things that IT teams know to be somewhat suspicious) with a much richer way to reason about the data.

This additional layer of understanding will work out of the box with the products an organization already has in place to provide key correlation and context. For instance, imagine that a malicious act occurs. That malicious act is going to be observed by multiple types of sensors. All of that information needs to be put together, along with the context of the internal systems, the external systems and all of the other things that integrate at that point. This gives the system the information needed to know the who, what, when, where, why and how of the event.

This is what the system’s brain does. It boils all of the data down to: “I see someone bad doing something bad. I have discovered them. And now I am going to manage them out.” What the XDR brain is going to give the IT security team is more accurate, consistent results, fewer false positives and faster investigation times.

How to apply an XDR brain

To get started with integrating XDR into your current system, take these three steps:

1. Deploy a solution that is vendor-agnostic and works out of the box. This XDR layer of security doesn’t need playbooks or rules. It changes the foundation of your security program and how your staff do their work. This reduces your commitment in time and budget for security engineering, or at least enables you to redirect it.

2. It has become much easier in the last several years to collect, store and – to some extent – analyze data. In particular, cloud architectures offer simple and cost-effective options for collecting and storing vast quantities of data. For this reason, it’s now possible to turn your sensors all the way up rather than letting in just a small stream of data.

3. Decide which risk reduction projects are critical for the team. Automation should release security professionals from mundane tasks so they can focus on high-value actions that truly reduce risk, like incident response, hunting and tuning security controls. There may also be budget that is freed up for new technology or service purchases.

To make the most of SOARs and SIEMs, you XDR – a tool that will take the data collected and add the context needed to turn thousands of alerts into one complete situation that is worth investigating.

The XDR layer is an addition to a company’s cybersecurity strategy that will most effectively use SIEM and SOAR, giving all those nerve signals a genius brain that can sort them out and provide the context needed in today’s cyber threat landscape.