75% of all 56 U.S. states and territories leading up to the presidential election, showed signs of a vulnerable IT infrastructure, a SecurityScorecard report reveals. 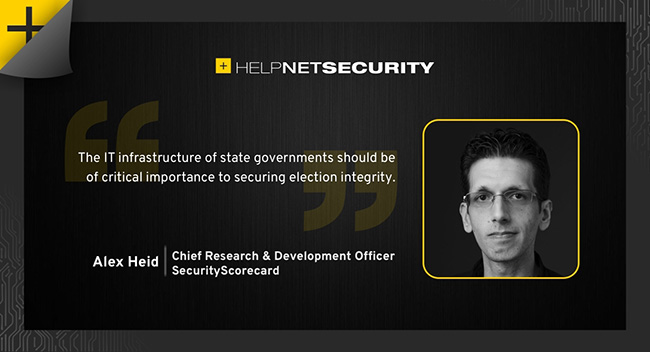 Since most state websites offer access to voter and election information, these findings may indicate unforeseen issues leading up to, and following, the US election.

Seventy-five percent of U.S. states and territories’ overall cyberhealth are rated a ‘C’ or below; 35% have a ‘D’ and below. States with a grade of ‘C’ are 3x more likely to experience a breach (or incident, such as ransomware) compared to an ‘A’ based on a three-year SecurityScorecard study of historical data. Those with a ‘D’ are nearly 5x more likely to experience a breach.

Significant security concerns were observed with two critically important “battleground” states, Iowa and Ohio, both of which scored a 68, or a ‘D’ rating.

According to political experts, the following states are considered “battleground” and will help determine the result of the election. But over half have a lacking overall IT infrastructure:

“The IT infrastructure of state governments should be of critical importance to securing election integrity,” said Alex Heid, Chief Research & Development Officer at SecurityScorecard.

“This is especially true in ‘battleground states’ where the Department of Homeland Security, political parties, campaigns, and state government officials should enforce vigilance through continuously monitoring state voter registration networks and web applications for the purpose of mitigating incoming attacks from malicious actors.

“The digital storage and transmission of voter registration and voter tally data needs to remain flawlessly intact. Some states have been doing well regarding their overall cybersecurity posture, but the vast majority have major improvements to make.”

“These poor scores have consequences that go beyond elections; the findings show chronic underinvestment in IT by state governments,” said Rob Knake, the former director for cybersecurity policy at the White House in the Obama Administration.

“For instance, combatting COVID-19 requires the federal government to rely on the apparatus of the states. It suggests the need for a massive influx of funds as part of any future stimulus to refresh state IT systems to not only ensure safe and secure elections, but save more lives.”

A set of best practices for states