The global network slicing market size is projected to grow from $161 million in 2020 to $1,284 million by 2025, at a Compound Annual Growth Rate (CAGR) of 51.5% during the forecast period, according to MarketsandMarkets. 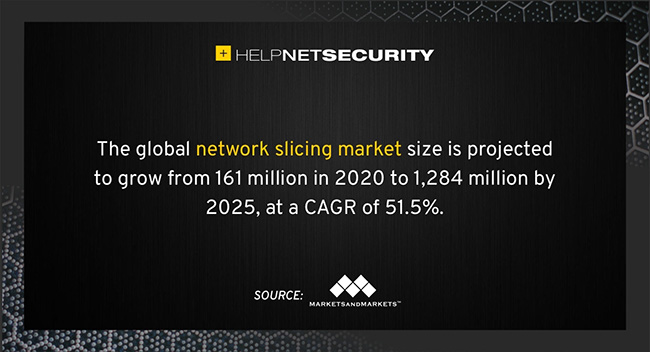 The network slicing market is gaining traction due to the evolution of cellular network technology, which has offered higher data speeds and lower latency. The rapid rise in the volume of data being carried by cellular networks has been driven largely by consumer demand for video and the shift of business toward the use of cloud services.

Services play a vital role in the deployment and integration of next-generation networking solutions in an enterprise’s business environment. Services are considered an important component of the network slicing market, as they majorly focus on improving the business processes and optimizing the enterprise’s network.

Services are considered as the backbone of network slicing, as they are instrumental in fulfilling the clients’ requirements, such as network testing, planning and optimization, support and maintenance, and consulting

The automotive industry also makes use of the 5G technology to boost the productivity, enhance the efficiency, increase drive the brand loyalty, and offer autonomous and cooperative vehicles with significantly improved security standards and multimodal transportation solutions.

The introduction of next-generation technologies, such as 5G gave birth to numerous applications, such as AR, virtual realityVR, and tactile internet.

North America region to record the highest market share in 2020

According to the Ericsson Mobility Report published in 2017, North America records the largest use of smartphones, and traffic per smartphone is expected to increase from 7.1GB per month by the end of 2017 to 48GB by the end of 2023.

The increasing number of internet subscribers, expanding mobile data traffic, and growing government emphasis on enhancing telecommunications infrastructure to meet the users’ demand for seamless connectivity would drive the market to a great extent in the region.

Further, the region is expected to be the early adopter of 5G services in areas such as AR/VR, autonomous driving, and AI owing to the high customer digital engagement.