Online propaganda is a rapidly growing problem, leaving chaos, mistrust, and revolutions rumblings in its wake. Broad propaganda penetration is achieved by following a specific set of steps, according to a new IDC Government Insights report. 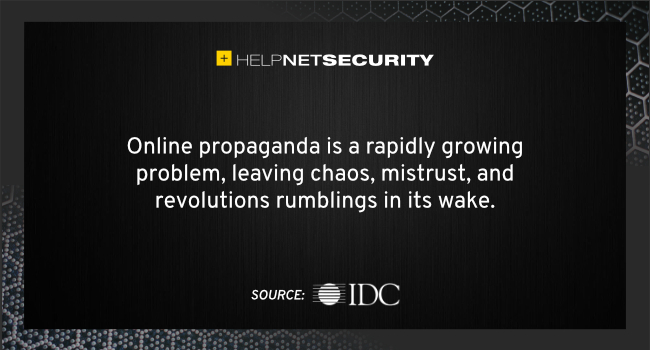 The most successful generators of false news use large networks of pop-up news sites and bot networks to help echo sentiments and increase pass-along rates. These types of “false information generation” activities can and should be monitored and mitigated by governments. The new report was designed to support government officials when addressing the challenges posed by an increase in the development and dissemination of false news.

When viewed through a technology lens, propaganda has become increasingly powerful and far-reaching because online tools have made it easy to create, distribute, and promote false claims while gaining followers and boosting pass-along rates. After all, sharing is just a click away.

The current concern is over the increased manipulation of public opinion, often via social media, coupled with the near-instant dissemination of false information. In democratic systems, this trend is viewed as an existential threat to democracy itself.

Mitigation efforts only work when agencies understand the economics of misinformation and distribution processes. Those that lack the marketing savvy to address these challenges are at a disadvantage and risk being undermined when misinformation thrives. However, just as AI-augmented systems have boosted the production and penetration of propaganda, AI will become an important tool for combating the flow of false information.

“Understanding how these services are funded, and how they use a combination of pop-up news sites, traffic-driving bots, and other techniques, is the first step toward helping governments mitigate the threat,” said Shawn P. McCarthy, research director, IDC Government Insights. “Disinformation, ultimately, can only be stopped by targeting the people behind the tools. And that means no longer allowing the perpetrators to operate in anonymity, with no fear of discovery or legal accountability.”