The pandemic’s work-from-home reality resulted in an unprecedented change for organizations as they fought to defend exponentially greater attack surfaces from cybercriminals armed with powerful cloud-based tools, cloud storage and endless targets. As working environments evolved, so did the methods of threat actors and other motivated perpetrators, as detailed in the SonicWall report. 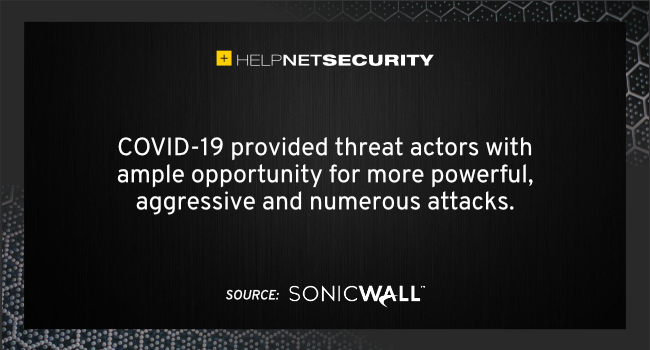 “2020 offered a perfect storm for cybercriminals and a critical tipping point for the cyber arms race,” said SonicWall President and CEO Bill Conner.

“The pandemic — along with remote work, a charged political climate, record prices of cryptocurrency, and threat actors weaponizing cloud storage and tools — drove the effectiveness and volume of cyberattacks to new highs. This latest threat intelligence offers a look at how cybercriminals shifted and refined their tactics, painting a picture of what they are doing amid the uncertain future that lies ahead.”

The report highlights how COVID-19 provided threat actors with ample opportunity for more powerful, aggressive and numerous attacks, thriving on the fear and uncertainty of remote and mobile workforces navigating corporate networks from home.

“There is no code of conduct when it comes to cybercriminals, their methods of attacks and the selection of their targets,” said Conner.

“Technology is moving at an unprecedented rate. Threats that were once thought to be two or three years away are now a reality, with do-it-yourself, cloud-based tools creating an army of cybercriminals armed with the same devastating force and impact of a nation-state or larger criminal enterprise. Organizations must remain vigilant and proactive in hardening their cybersecurity posture.”

The report goes inside the stories that headlined 2020, and takes a closer look at new and disruptive cyber threats to provide insight into the evolving cyber threat landscape.

Cryptojacking returns as cryptocurrency breaks records: Once thought to be a dying attack vector after the industry’s major mining operation boarded its online service, cryptojacking is back thanks to rising cryptocurrency values and its appeal of concealed payouts. Total cryptojacking for 2020 set records with 81.9 million hits, a 28% increase from last year’s 64.1 million total.

Intrusion attempts up as attack patterns change: The distribution of intrusion attacks took on an entirely new character as a result of the changes brought on by the pandemic. In 2020, Directory Traversal tactics (34%) took over the top spot after a tie with remote code execution (21% for both) in 2019.