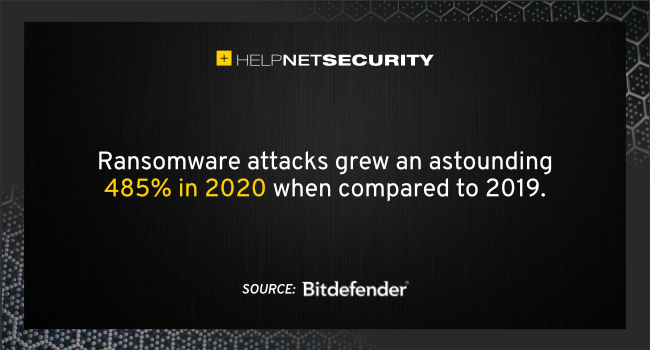 “Our 2020 findings depict consumers under constant assault from cybercriminals looking to capitalize on fear and societal uncertainty accompanying the global pandemic,” said Bogdan Botezatu, director of threat research and reporting at Bitdefender.

“Cybercriminals will stop at nothing to use outlier events and human empathy to line their pockets. As the pandemic continues we are constantly seeing attacks evolve through malware delivery mechanisms, inventive social engineering and new exploits.”

The report is based on the analysis of quarter-on-quarter and year-on-year data derived from Bitdefender’s Global Protective Network (GPN).

Ransomware attacks soar worldwide – Overall, ransomware attacks grew an astounding 485% in 2020 when compared to 2019. Attacks in the first and second quarter of 2020 accounted for 64% of all attacks or 19% higher than the first two quarters of 2019.

Potentially unwanted applications (PUA) on the rise – While PUA might not be malicious per se, they can impact user experience by slowing down systems, display unexpected ads or even install additional software. There was a 320% increase in reported PUA in 2020 when compared to the previous year however, quarterly distribution patterns remained similar suggesting consistent growth.