An expectation on the part of workers that they will be allowed to work remotely more often will be one of the legacies of the pandemic, according to a study by Boston Consulting Group (BCG) and The Network. 89 percent of people said their preference in the future will be for a job that allows them to work from home at least occasionally. 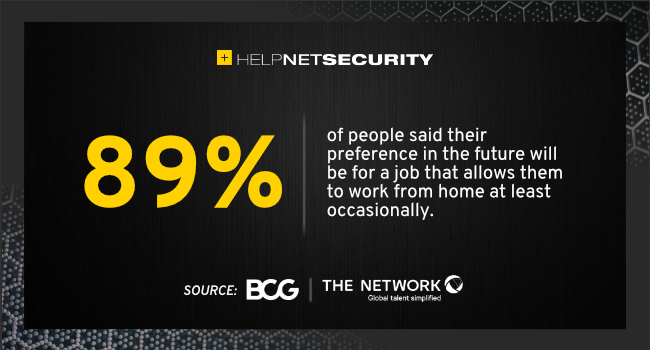 “People got a taste of remote work during the pandemic, and it has completely changed their expectations,” said Rainer Strack, one of the authors of the study and a senior partner at BCG. “It sends a very clear message that nine out of ten people want some aspects of this to be sustained. Employers can’t treat working from home as an occasional perk anymore.”

Most people prefer a hybrid model, with two or three days a week from home and the rest in the office, according to the study. And it isn’t just those in digital, knowledge, and office jobs – many of whom are already working remotely—who want more workplace flexibility on a permanent basis. Even study participants who have jobs that require the handling of physical goods, or contact with clients, expressed a desire for setups that would allow them to work remotely at least occasionally.

It is indeed flexibility that most people are interested in, not a 180-degree turn in the traditional model that would have everyone working from home all the time and never going to a physical work location. Only a relatively small proportion of workers—one in four—would switch to a completely remote model if they could.

Falling outside the pattern of developed- and developing-country attitudes are the US and China. Thirty-five percent of Americans say they would be happy to do their jobs 100% from home. This relatively high proportion (the US is the only developed country that ranks in the top ten for interest in fully remote work) may reflect the difference in cost of living between large US cities and the locations where people would choose to live if they didn’t need to commute.

By contrast, only 8% of Chinese workers say they would be willing to work from home full time, a number that places China near the bottom of our list of fully remote work preference. (The analysis was done for 45 countries; China ranked 43rd.)

An emphasis on near-term benefits

Apart from work location and work practices, the survey also identified some shifts in what people value at work. In BCG and The Network’s last study on global talent, in 2018, respondents said that they expected their jobs to provide them with a mix of both short- and long-term benefits.

The short-term benefits that were most important in 2018—good relationships with colleagues and managers and a good work-life balance—still top the list today. And another short term-benefit—pay—has joined them as a priority. Long-term benefits like career development and skills training have faded.

“It would be surprising if priorities didn’t change, given the economic and existential crisis everyone has experienced,” said Ana López Gobernado, international operations director of The Network and one of the report’s authors. “During a pandemic, people are happy to just have a job and a stable income. At the same time, relationships and a balanced life still matter. Employers need to ensure that these softer needs are met even in virtual work settings.”

New worker attitudes on diversity and the environment

COVID-19 is not the only event in the past year that has changed people’s expectations about work. Protests have job seekers paying more attention to social values in the workplace. And a succession of climate catastrophes, including the Australian bushfires of 2019 and 2020, have prompted some job seekers to question prospective employers’ levels of environmental commitment.

Roughly seven in ten respondents said diversity and climate had become more important issues to them in the last year. (The younger the cohort, the higher the likelihood of the issue growing in importance.) Half of all workers said they would not accept a job offer from an employer whose policies in these areas didn’t match their personal beliefs.