77% of financial apps have at least one serious vulnerability that could lead to a data breach, an Intertrust report reveals. 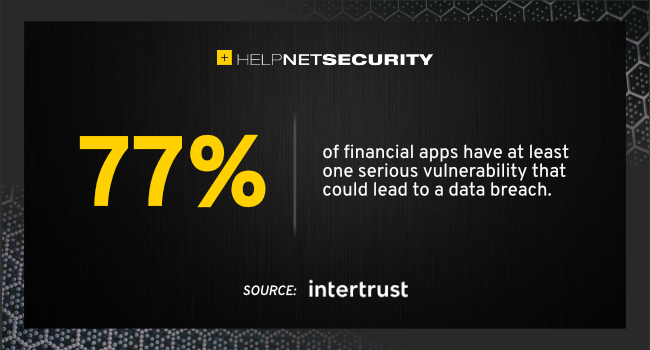 This report comes at a time where finance mobile app usage has rapidly accelerated, with the number of user sessions in finance apps increasing by up to 49% over the first half of 2020. Over the same period, cyberattacks against financial institutions rose by 118%, according to VMware.

The study’s overall findings suggest that while the COVID-19 pandemic accelerated the world’s shift to digital financial channels and innovative technologies like mobile contactless payments, mobile financial application security is not keeping up.

Cryptographic issues pose one of the most pervasive and serious threats, with 88% of analyzed apps failing one or more cryptographic tests. This means the encryption used in these financial apps can be easily broken by cybercriminals, potentially exposing confidential payment and customer data and putting the application code at risk for analysis and tampering.

“As mobile finance apps increasingly enter people’s everyday lives, it’s vital to understand the security risks associated with these apps and the ways to help mitigate them,” said David Maher, CTO and EVP at Intertrust.

“Poor financial app security puts both financial organizations and their customers at risk, especially given the rise in cyberattacks over the course of the pandemic,” he added.