The Cambridge Research Laboratory of Toshiba Europe announced a demonstration of quantum communications over optical fibres exceeding 600 km in length. The breakthrough will enable long distance quantum-secured information transfer between metropolitan areas and is a major advance towards building the future quantum internet. 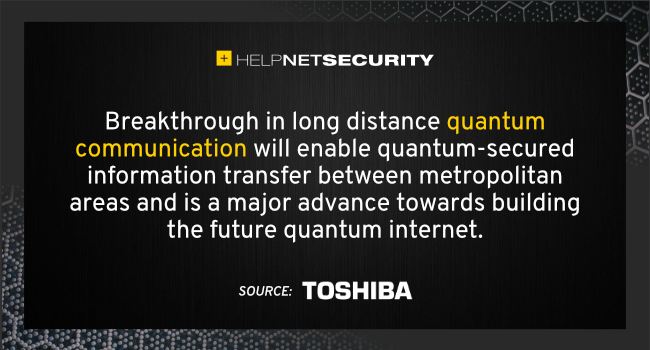 The term quantum internet describes a global network of quantum computers connected by long distance quantum communication links. It is expected to allow the ultrafast solution of complex optimization problems in the cloud, a more accurate global timing system and highly secure communications across the globe. Several large government initiatives to build a quantum internet have been announced, for example in the US, EU and China.

One of the most difficult technological challenges in building the quantum internet, is the problem of how to transmit quantum bits over long optical fibres. Small changes in the ambient conditions, such as temperature fluctuations, cause the fibres to expand and contract, thereby scrambling the fragile qubits, which are encoded as a phase delay of a weak optical pulse in the fibre.

Record distances for quantum communications have been demonstrated by introducing a novel ‘dual band’ stabilisation technique. This sends two optical reference signals, at different wavelengths, for minimising the phase fluctuations on long fibres. The first wavelength is used to cancel the rapidly varying fluctuations, while the second wavelength, at the same wavelength as the optical qubits, is used for fine adjustment of the phase.

After deploying these new techniques, it was found it is possible to hold the optical phase of a quantum signal constant to within a fraction of a wavelength, with a precision of 10s of nanometers, even after propagation through 100s of km of fibre. Without cancelling these fluctuations in real time, the fibre would expand and contract with temperature changes, scrambling the quantum information.

The first application for dual band stabilization will be for long distance Quantum Key Distribution (QKD). Commercial QKD systems are limited to around 100-200 km of fibre. In 2018, the Twin Field QKD protocol was proposed as a way to extend the distance, and tested its resilience to optical loss using short fibres and attenuators. By introducing the dual band stabilization technique, Toshiba has now implemented Twin Field QKD on long fibres and demonstrated QKD over 600km, for the first time.

“This is a very exciting result,” comments Mirko Pittaluga, first author of the article describing the results. “With the new techniques we have developed, further extensions of the communication distance for QKD are still possible and our solutions can also be applied to other quantum communications protocols and applications”.

Andrew Shields, Head of the Quantum Technology Division at Toshiba Europe remarks, “QKD has been used to secure metropolitan area networks in recent years. This latest advance extends the maximum span of a quantum link, so that it is possible to connect cities across countries and continents, without using trusted intermediate nodes. Implemented along with Satellite QKD, it will allow us to build a global network for quantum secured communications.”

Data and quantum keys transmitted on the same fibre

This latest development follows the announcement last year that BT and Toshiba had installed the UK’s first industrial quantum-secure network. Transmitting data between the National Composites Centre and the Centre for Modelling & Simulation, a multiplexing compatibility allows the data and the quantum keys to be transmitted on the same fibre, eliminating the need for costly dedicated infrastructure for key distribution.

The security of the secret key rests upon the fundamental properties of individual quantum systems (photons, the particles of light) which are encoded and transmitted for the key generation. In the event that these photons are intercepted by an undesignated user, quantum physics guarantees that the intended users can perceive the eavesdropping, and consequently protect the communication.

Unlike other existing security solutions, the security of quantum cryptography derives directly from the laws of physics we use to describe the world around us, and for this reason, it is secure against any future advances in mathematics and computing (including the advent of quantum computers). In light of this, QKD is expected to become an essential tool for protecting operation-critical communications for businesses and governments.