Aqua Security published a research revealing a continued rise in cyberattacks targeting container infrastructure and supply chains, and showing that it can now take less than one hour to exploit vulnerable container infrastructure. The report provides a detailed analysis of how bad actors are getting better at hiding their increasingly sophisticated attacks. 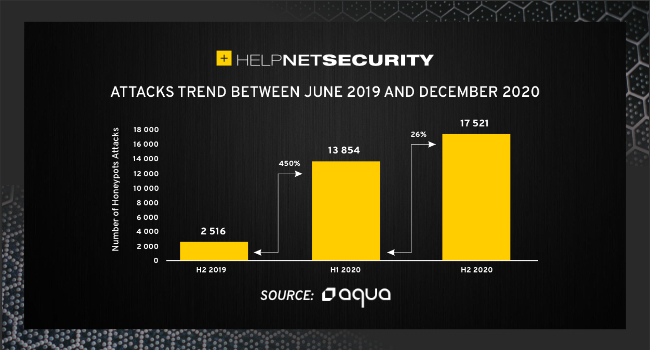 “At the same time, we’re also seeing that attacks are now demonstrating more sinister motives with greater potential impact. Although cryptocurrency mining is still the lowest hanging fruit and thus is more targeted, we have seen more attacks that involve delivery of malware, establishing of backdoors, and data and credentials theft.”

Among the new attack techniques, a massive campaign targeting the auto-build of SaaS dev environments was uncovered.

“This has not been a common attack vector in the past, but that will likely change in 2021 because the deployment of detection, prevention, and security tools designed to protect the build process during CI/CD flow is still limited within most organizations,” added Morag.