71 percent of enterprise executives reported their organization’s data and AI timelines have accelerated since the onset of the COVID-19 pandemic, with one in four reporting their data initiatives have significantly accelerated, according to Protegrity. 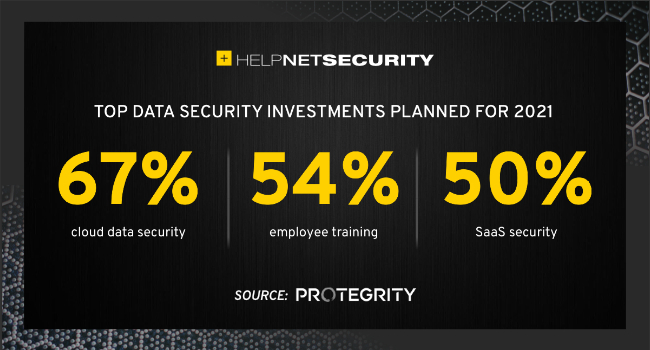 When asked their organization’s top data security priorities for the next six-to-12 months, 72 percent of respondents cited the need to speed up their ability to use secure data for AI and advanced analytics initiatives.

Findings from more than 600 executives in the U.S. – including 382 security and privacy executives and 228 data and AI executives – reveal key insights on the impact of data security investments on AI and advanced analytics initiatives. Comparison between the two executive audiences found that data and AI executives were more likely to cite the need to accelerate their ability to use secure data for AI (78 percent) compared to privacy and security executives (69 percent).

“In response to the COVID-19 pandemic, enterprises have undergone a dramatic acceleration of digital transformation, cloud, and AI initiatives,” said Rick Farnell, president and CEO of Protegrity.

“However, as data proliferates across the business, organizations must have tools and policies in place to properly identify and secure any sensitive information. According to our research, executives understand that effective data security can not only protect a brand’s reputation in the event of a data breach, but can also speed up their ability to innovate with secure data for mission-critical AI and analytics.”

Data security investment on the rise

Recent Gartner research found that unlike some information security segments, the pandemic accelerated growth for cloud security and data security in 2020, with cloud security spending projected to increase 33 percent over 2019.

Despite potential implementation challenges, many organizations anticipate significant benefits as a result of a greater investment in data security technology and practices. Interestingly, the most widely agreed-upon benefit of data security was improved customer experience, as cited by 70 percent of respondents.

Additional anticipated benefits include reduced financial risk due to a data breach (64 percent), reduced reputational business risk due to a data breach (61 percent), and a greater ability to utilize secure data for AI and advanced analytics initiatives (59 percent). Data and AI executives were more keenly aware (69 percent) of data security’s potential impact on AI and analytics timelines than their security and privacy counterparts (54 percent).

Businesses are quickly turning to the cloud to achieve faster analytics results at scale. In fact, according to Gartner, end-user spending on public cloud services is projected to increase by more than 18 percent in 2021 to total $304.9 billion. Protegrity’s study further validates this projection, with nine out of 10 executives surveyed planning to increase cloud usage or migrate new data to the cloud in the next 12 months.

When asked what barriers they anticipate to increased cloud adoption, 39 percent of executives cited insufficient employee skills to properly move data to cloud environments, followed closely by budgetary constraints (38 percent), and the risk of unsecured data in transit to the cloud being breached (38 percent). Other potential barriers to cloud adoption include compliance with privacy regulations (26 percent) and reliance on on-premises environments (24 percent).

In recent years, a number of industry- and country-specific privacy regulations have emerged, which have significantly impacted how businesses use and protect their data. In response to these new and evolving laws, 55 percent of surveyed executives identified compliance with data privacy regulations as a top priority for the coming year.

Additionally, 76 percent of executives reported they are concerned about the impact that new, state-specific data privacy regulations – such as California’s CCPA and Virginia’s CDPA – will have on their organization’s data initiatives.

Farnell continued, “Global enterprises today face a myriad of data privacy regulations, which will only be compounded by looming regulations that are coming down the pike. This new reality further stresses the need for businesses to protect the privacy of anyone and everyone whose personally identifiable information resides with their corporate data ecosystem. Only then can organizations consistently and reliably make the most of their data while staying in step with compliance both now and in the future.”