Subscriber adoption of the fifth generation of wireless (5G) has increased significantly, as global wireless 5G connections for the second quarter (Q2) of 2021 reached 429 million, according to data from Omdia, said 5G Americas. 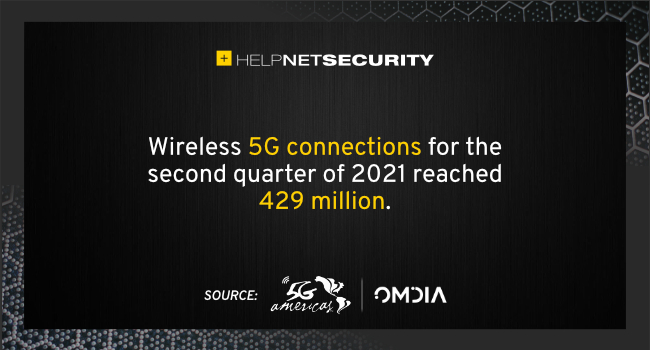 Chris Pearson, President of 5G Americas said, “5G is progressing at a very rapid pace. Yet, the pace of subscriber uptake is only the beginning. 5G will be foundational for a new era of technology innovation throughout the world.”

According to Omdia, the world added 124 million 5G connections between Q1 and Q2 of 2021, increasing 41% from 305 million to 429 million. 5G remains on pace to triple the number of connections in 2020 and is forecast to reach 692 million globally by the end of the calendar year.

Additionally, ten 5G commercial networks went live globally in Q2 2021, bringing the global total up to 182 networks, according to data from TeleGeography. That number is expected to reach 220 by the end of 2021 and 323 by the end of 2023.

Forward projections for 5G and 4G LTE remain healthy, with estimates of global 5G connections reaching 4.7 billion in 2026. Of that, 512 million is expected to come from North America and 277 million in Latin America and the Caribbean.

In its first year of commercial availability in Latin America and the Caribbean, 5G connections reached 15,706, which includes 11655 new additions in the past year. LTE remains the dominant wireless cellular technology in the sub-region with 454.8 million connections, an addition of 71 million new LTE subscriptions year over year, representing 18.4 percent annual growth.

According to Jose Otero, VP of Caribbean and Latin America for 5G Americas, “The ongoing geographic expansion of enhanced mobile broadband networks together with the wider availability of handsets supporting this technology is driving 4G adoption in markets such as Brazil, Colombia, and Mexico. However, at the other end of the spectrum, 2G and 3G continue to lose subscribers as operators start planning their disconnection and prepare for the impending mass-market demand of 5G services, expected to start in 2024.”