Secret Double Octopus and Ponemon Institute announced the results of a US-based study focused on understanding the state of workforce passwordless authentication, from motivational drivers to results after transitioning to its use. 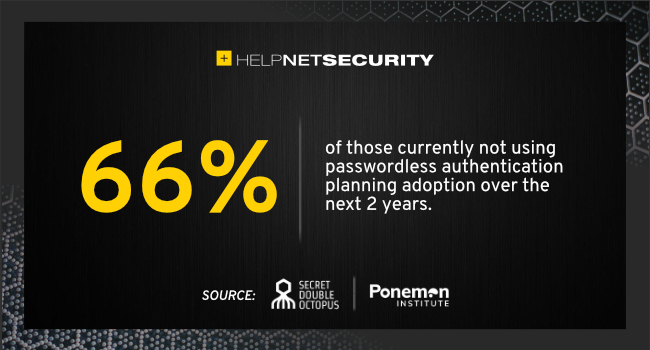 Results demonstrated that remote work has and will continue driving adoption of workforce passwordless authentication. In addition, using survey responses the cost of economic efficiencies from the use of passwordless technologies was calculated and suggests cost savings of $1.9M over conventional password-based MFA.

“Enterprises continue to feel threatened in the pandemic with many feeling targeted, and this along with remote work and associated loss of productivity from password problems is driving increased adoption of passwordless technologies,” said Dr Larry Ponemon. “Going forward organizations are extremely bullish on adopting passwordless authentication.”

The study highlights that most organizations are using MFA in some way, with 60% reporting some use, but key areas such as servers, VPN, legacy software, mobile applications and virtualization all have MFA in use at less than 40% of respondents’ environments.

To estimate the total amount of economic loss from traditional password-based authentication versus passwordless, organizations were asked to detail the costs attributed to a range of costs, including direct IT costs, downtime, lost business, damaged reputation and paid ransomware.

Over the 2-year period,

“Many organizations may feel they are doing the most expedient thing for securing their organizations by rolling out more conventional MFA,” said Horacio Zambrano, CMO of Secret Double Octopus. “But the data clearly show there is an enormous amount of lost productivity per employee and financial risk by not removing the link between the password and the employee.”

Recommendations for the enterprise

To reach the goals of better security and increased productivity, organizations must: