LTE IoT market is expected to register a healthy CAGR of over 28% during the forecast period (2021 – 2026), accordig to ResearchAndMarkets. The growth of connected devices and the need for unique and defined network qualities are fueling the growth of the LTE IoT market. 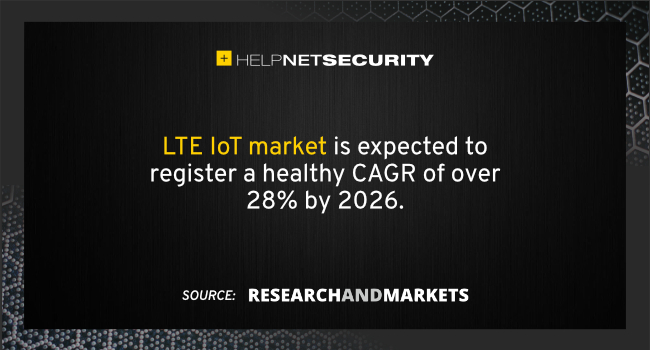 Due to the delicate nature of manufacturing operations, manufacturers are adopting IoT solutions, sensors, and IoT wireless connectivity platforms to increase their productivity, thereby transforming their operations into smart manufacturing.

Many software and solution providers are offering industries smart manufacturing applications that include proactive and automatic analytics capabilities, making industrial manufacturing an intelligent and self-manageable environment. The LTE technology is availed to establish stable connectivity among various devices in a factory for data transmission, to enable industries to tackle the issues related to predictive maintenance and autonomous production.

However, the market observed challenges that are highly region-specific. The enterprises demanding to deploy an IoT project within the United States have to be based on the LTE-M network due to the predominant presence of LTE radios. Alternatively, LTE CAT M1 devices’ presence in Asia, Africa, and Eastern Europe is due to the fact that mobile network operators are still using 3G connectivity. However, NB-IoT devices can be found in abundance across Asia, especially China, due to the presence of low-cost device manufacturers.

The spread of COVID-19 has impacted many sectors that are the main markets for LTE IoT technology. For example, the construction sector is witnessing a slower growth rate due to COVID; many of the running projects are either stalled or canceled. This stops the further installation of IoT devices, such as smart street lights, meters, and parking meters. Moreover, the pandemic also affected the consumer and retail market as well; smart devices, smart appliances sales also declined due to this. All these devices actively use NB-IoT Chipset.

Industrial sector is expected to grow at a significant rate

The IoT is transforming the way the approach of the organizations communicating and regulating their everyday businesses and industrial processes. Its widespread adoption across the industries has proven to be well suited for sectors that have to manage a large number of assets and coordinate complex and distributed operations.

Due to the complexity and diversity of industrial requirements, there are numerous types of communication systems required. With new technologies in place, current warfare is now being referred to as network-centric warfare wherein a robustly networked architecture improves information sharing that enhanced the quality of information and shared situational awareness. Such an extended applications and servicability of the market type has helped it to create a demand specific to market and end users need.

Flexibility, interoperability, and longevity are key characteristics of networked communications for the LTE applications, that are helping to create demand for the end users, to maintain close coordination within the team as well as across adjacent and higher operating units in industries. With the advancement in the LTE along with the development in IoT, the future of the market holds a lot of promise for enhanced situational awareness via voice, video, and data delivered not only limited to the emergency operations/dispatch of services but also to first responders in the field.

The rapid automation and development of IoT devices to be used in a harsh and dangerous environment such as oil rigs, underwater pipelines, off-shore platforms, blast furnaces, etc., will boost the demand for LTE IoT devices and sensors.

Europe is gaining the LTE IoT market presence owing to the widespread adoption of the LTE technology for enterprises’ IoT applications. The well-established presence of some of the prominent players across the region such as Telefonaktiebolaget LM Ericsson, Halberd Bastion Pty Ltd, u-blox AG among others is expected to further assist the regional market in the overall growth.

The region is leading in terms of LTE IoT coverage area, with some of the ongoing development by the prominent players across the region, fueling the demand across the region. For instances, Huawei and Vodafone opened an open lab in Newbury, UK, for R&D of LTE IoT technologies and applications.

European Commission and European Union member states are committed to developing strategies to support experiments and the deployment of IoT telecom and allied services. Various cellular operators are also set for the widespread deployment of LTE IoT in the UK and rest of Europe where, Germany, UK, and France are the top 3 contributors to the LTE IoT market in Europe. Further, several pre-commercial trials and plots have also been deployed by Mobile Network Operators (MNOs) across Europe.