The video surveillance systems market is expected to grow at a CAGR of 10.06% over the forecast period 2021 to 2026, according to ResearchAndMarkets. 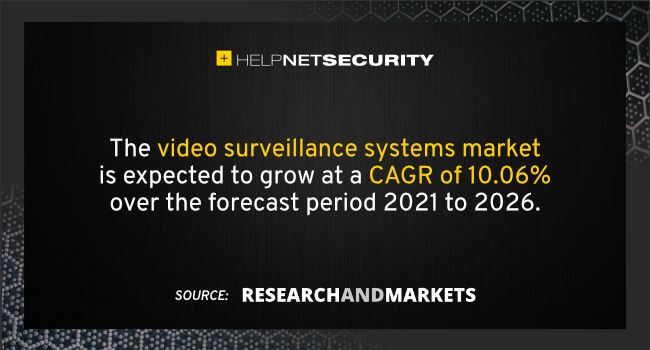 Commercial segment is to dominate the video surveillance systems market

Cameras with pan, tilt and wide zoom features are preferred to detect and track intruders. 360-degree panoramic cameras and thermal infrared cameras, which can operate in the dark, are expected to witness increased adoption over the forecast period. The previous models of 4K cameras offer a lower frame rate resolution. However, the advent of 4K in video surveillance is much ahead in the consumer market, as compared to that of 1080p.

Further, the use of GPU (Graphics Processing Unit) in the video surveillance system is accelerating the camera capabilities by at least 25% higher performance, 30% higher camera counts at full HD resolution, and 30 frames per second against 15-30 frames per second, which was throwing a massive pile of CPU earlier.

China in Asia Pacific is presumed to dominate the market

The introduction of the smart cities concept in the country is the major driving force for the video surveillance market in China. Advanced video surveillance techniques have been integrated with the city administration to boost efficiency. Yinchuan city in China is an example of an advanced smart town where everything, from buses to dustbins, is integrated into a unified system.

One of the pioneer systems designed using video surveillance was the Hangzhou “City Brain” project, created by Chinese retail and tech company Alibaba, which uses camera systems and sensors across the city to collect data on road conditions in real-time. The data is fed to an AI hub, which manages traffic signals at 128 intersections and helps city officials make better decisions faster.

China is making progress on a surveillance system that will connect security cameras nationwide via a cloud to a database of every person’s facial ID profile and a file of their personal details, according to an article in the South China Morning Post (SCMP). The article has led to a discussion as to whether the system already exists and what its potential dangers may be.

The SCMP piece updates the story on the Chinese government’s plan to implement a national system that could use surveillance cameras to identify any one of China’s 1.3 billion people within 3 seconds and with at least 88% accuracy. The project has been underway since 2015, and various technology companies have been involved. It is, however, facing some technical difficulties.

China is a major driver for AI surveillance worldwide, as it is home to companies, such as Huawei, ZTE, Dahua, and Hikvision, that provide surveillance technology for over 63 countries, with 32 of them signed onto China’ Belt and Road Initiative.