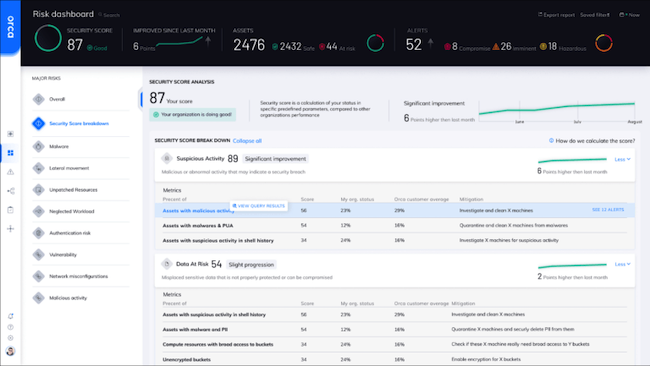 For the first time, security teams can manage their cloud security configuration, protect workloads, manage infrastructure entitlements, achieve broad regulatory compliance, and benchmark their cloud security from a single agentless multi-cloud platform. Orca Security’s context-aware engine unifies the intelligence collected from deep inside the workload with cloud configuration and infrastructure entitlement details to immediately surface risks and their root cause.

Further updates to Orca Security include support for over forty compliance frameworks and Orca Security Score – the first-ever benchmark to help organizations compare their multi-cloud security posture to industry peers and across their own business units.

Identity is a key component in cloud security,” said Avi Shua, co-founder and CEO of Orca Security. “Unlike other cloud security solutions that take a siloed approach to identity risk, Orca Security gives practitioners a complete view of their security posture together with contextualized risks, such as vulnerabilities, misconfigurations, malware infections, and sensitive data. Orca Security also goes beyond native cloud identities, to also consider unmanaged identities that are provisioned as SSH keys and passwords residing on the workloads themselves. This allows our customers to have the full coverage they need to innovate securely in the cloud.”

According to Gartner, “by 2024, organizations running cloud infrastructure services will suffer a minimum of 2,300 violations of least privilege policies, per account, every year.” This report also states that, ‘the vast majority of granted entitlements in IaaS are unnecessary. More than 95% of accounts in IaaS use, on average, less than 3% of the entitlements they are granted, which greatly increases the attack surface for account compromises.”

Cloud infrastructure entitlements management (CIEM) is an essential capability within modern cloud security platforms. Orca Security monitors all identities, roles, groups, permissions, and policies deployed in a public cloud environment, and alerts teams when there are violations in identity management best practices, such as the principle of least privilege access.

By combining CIEM, CSPM, and CWPP capabilities into a single CNAPP platform and data model, Orca Security can flag attack chains containing risky combinations. For example, an infected workload that can assume a high privileged instance role allowing access to a database with PII is prioritized for immediate remediation.

Orca Security Score helps security and compliance teams demonstrate the state of their security controls and progress to auditors, top management, the board, investors, and cyber insurance companies. Organizations can now benchmark their cloud security against industry peers or across business units, as well as measure their progress over time. The Orca Security score is based on factors such as suspicious activity, lateral movement risk, data at risk, vulnerable assets, and time-to-remediate critical security issues.

Built-in compliance for over forty frameworks and benchmarks