According to the Strata Identity and Forrester study, 78% of IT decision-makers said managing user identities between multiple clouds is the number one challenge. 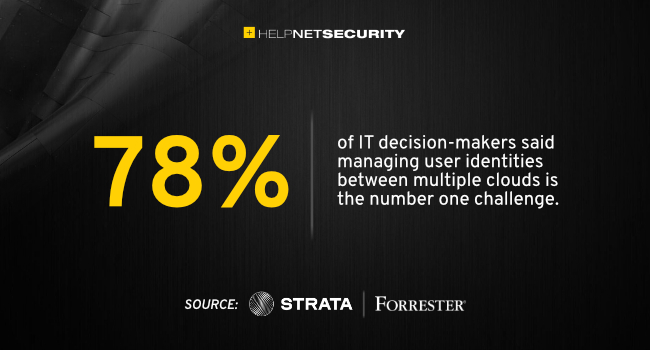 The study found that the top driver for migrating to the cloud is the need to increase security and protect data – 70% of respondents said it is very important. Meanwhile, 28% of companies are using four or more public/private clouds today, but that is expected to more than double in two years to 65%.

“As cloud service providers improve their security and data protection offerings, decision-makers increasingly realize they can’t protect their firms’ data on-premises as well as they can in the cloud. But migrating existing IAM (identity and access management) tools and processes to multicloud IaaS, PaaS, and private clouds creates problems that firms must solve…” according to the Forrester study.

For example, nearly two-thirds of IT decision-makers said the complexity of their firm’s current IAM causes its employees to spend less time on innovation and impedes overall business agility.

“According to the Forrester study, firms can’t just lift-and-shift existing IAM tools from on-premises to the cloud,” said Eric Olden, CEO of Strata Identity. “Multi-cloud ecosystems are complex and create a broader attack vector, so companies must plan their IAM strategy carefully or risk leaving themselves vulnerable.”

The challenges of managing user identities