Distributed Denial-of-service (DDoS) attacks decreased slightly in 2021 but are becoming larger and more complex in nature, an analysis from F5 has found. 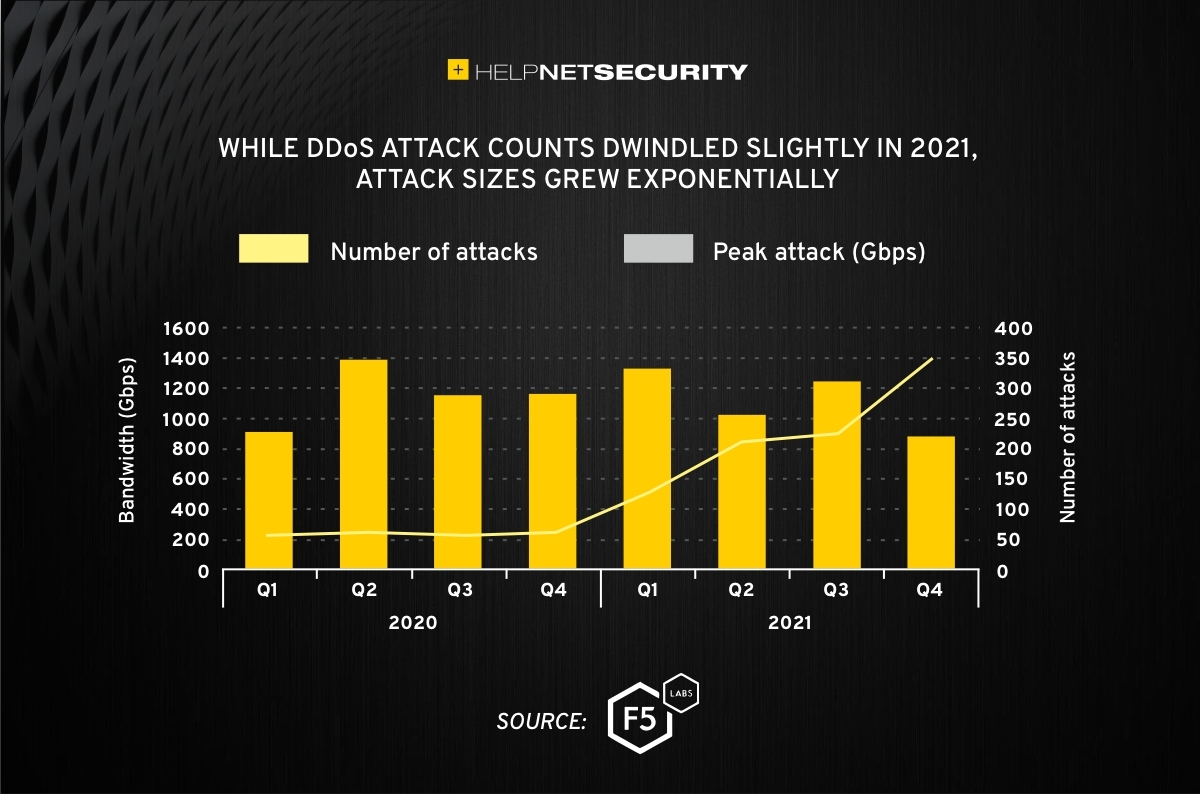 Data showed a 3% year-on-year decline in the overall volume of attacks recorded in 2021. However, while volume may have declined, the severity of attacks ramped up markedly over the course of the year.

By Q4 2021, the mean attack size recorded was above 21 Gbps, more than four times the level from the beginning of 2020. Last year also saw the record for the largest-ever attack broken on multiple occasions.

“The volume of DDoS attacks has fluctuated by quarter, but the unmistakable trend is that these attacks are getting larger,” said David Warburton, Director of F5 Labs. “While the peak size of attack remained steady throughout 2020, last year we saw it climb consistently.”

Attacks are getting larger

While most attacks recorded in 2021 were under 100 Mbps, there were some notable exceptions.

After the largest attack of 2020 topped out at 253 Gbps, there was one that struck in February 2021 measuring 500 Gbps. The record was shattered again in November with an attack weighing in at 1,4 Tbps—more than five times larger than the previous year’s record.

Targeting an ISP/hosting customer, maximum attack bandwidth was reached in just 1,5 minutes, and lasted only four minutes in total, harnessing a combination of volumetric (DNS reflection) and application-layer (HTTPS GET floods) methods.

Volumetric attacks, which use publicly available tools and services to flood a target’s network with more bandwidth than it can handle, continued to be the most common form of DDoS in 2021, comprising 59% of all recorded attacks. This represented a slight decline from 66% in the previous year, as the prevalence of protocol and application-type DDoS attacks ticked up, the latter increasing by almost 5% year-on-year.

This slight shift was underlined by changing the utilisation of protocols. 27% of attacks in 2021 harnessed TCP, up from 17% the previous year, and indicative of the requirements of more complex application and protocol-based attacks.

In terms of specific attack methods, there were some notable changes in prevalence: DNS query attacks became more common, up 3,5% year-on-year and the use of UDP fragmentation declined 6.5%. LDAP reflection also diminished by 4,6% and DNS reflection by 3,3%.

“Alongside changes in attack type, we continued to observe strong prevalence of multivectored attacks, including the 1,4 Tbps incident that utilised a combination of DNS reflection and HTTPS GETS,” said Warburton.

“This was particularly true at the start of the year, when multivectored attacks significantly outnumbered single-vector assaults. It illustrates the increasingly challenging landscape for threat protection, with defenders needing to employ more techniques in parallel to mitigate these more sophisticated attacks and prevent a denial of service.”

Financial services in the crosshairs

Banking, financial services and insurance (BFSI) was the industry most targeted by DDoS attacks in 2021, subjected to more than a quarter of the total volume. That continued a trend which has seen attacks against BSFI steadily rising since the beginning of 2020.

By contrast, technology, the most targeted sector of 2020, fell into fourth place behind telecommunications and education. Between them, these four industries accounted for 75% of all recorded attacks, with a long tail of others including energy, retail, healthcare, transportation and legal that saw hardly any adverse activity.

“Even though the number of attacks tapered off slightly in 2021, the DDoS problem is by no means abating,” said Warburton. “Both the size and complexity of these attacks are increasing, demanding a more agile and multi-faceted response from defenders.

“Although it is reasonable to question the efficacy of attacks that may only last for a few minutes, threat actors know that even a short interruption to a service can have significant consequences and adversely impact brand and reputation.

“As the sophistication and variety of DDoS attacks increases, organizations will find themselves using a wide variety of measures to protect against them, including upstream controls to inspect and limit the traffic reaching endpoints, and managed service providers who can work alongside internal security teams both to prevent attacks and move quickly to mitigate those in progress.”