VMware released a report which takes the pulse of the financial industry’s top CISOs and security leaders on the changing behavior of cybercriminal cartels and the defensive shift of the financial sector. 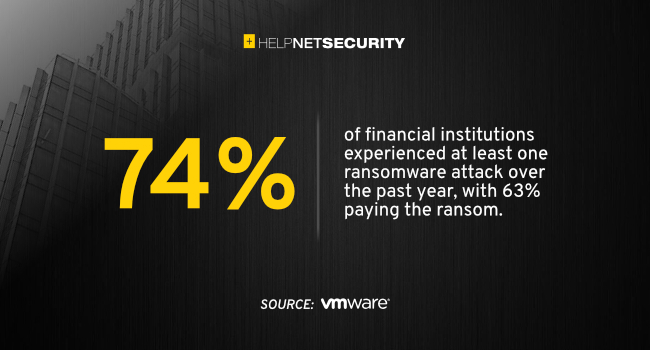 The report found that financial institutions are facing increased destructive attacks and falling victim to ransomware more than in years’ past, as sophisticated cybercrime cartels evolve beyond wire transfer fraud to now target market strategies, take over brokerage accounts and island hop into banks.

In the Modern Bank Heists report, 63% of financial institutions admitted experiencing an increase in destructive attacks, with cybercriminals leveraging this method as a means to burn evidence as part of a counter incident response.

Additionally, 74% experienced at least one ransomware attack over the past year, with 63% paying the ransom. When asked about the nation-state actors behind these attacks, the majority of financial instructions stated that Russia posed the greatest concern, as geopolitical tension continues to escalate in cyberspace.

The report also found that once cybercriminals gain access into a financial organization, they’re no longer after wire transfers or access to capital as traditionally assumed. Cybercriminal cartels are now seeking nonpublic market information, such as earnings estimates, public offerings, and significant transactions. In fact, 66% of financial institutions experienced attacks that targeted market strategies. This modern market manipulation aligns with economic espionage and can be used to digitize insider trading.

Tom Kellermann, head of cybersecurity strategy, VMware: “Security has become top-of-mind for business leaders amid rising geopolitical tension, an increase in destructive attacks utilizing wipers and Remote Access Tools (RATs), and a record-breaking year of Zero Day exploits. Financial institutions now understand that today’s attackers are moving from heist to hijack, from dwell to destruction, and leaving their mark on an extremely vulnerable sector. Collaboration between the cybersecurity community, government entities and the financial sector is paramount to combat these emerging, increasing threats.”

Jeremy Sheridan, former assistant director, the U.S. Secret Service: “The Secret Service, in its investigative capacity to protect the nation’s financial payment systems and financial infrastructure, has seen an evolution and increase in complex cyber-enabled fraud. There are a variety of reasons for the opportunities, motives, methods, and means related to criminal activity. At the forefront is the swelling profitability of these crimes which, of course, motivates criminal actors.

“The persistent, inadequate security of systems connected to the internet provides opportunity and methodology. Finally, the proliferation of digital money payment systems has created a global, instantaneous, and pseudo-anonymous means to facilitate their actions. All of these factors have facilitated the maturation of a cybercriminal ecosystem that has not been sufficiently suppressed.

“We see these trends continuing into the future and utilizing greater anonymizing techniques such as peer to peer networks, privacy coins, encrypted communications, and darknet marketplaces to further expand cybercrime capabilities and reach.”