Logpoint has announced findings from a recent poll to uncover the security and cost implications enterprises face with their existing IT infrastructure. The poll was targeted at cybersecurity and IT professionals in both the U.S. and UK. 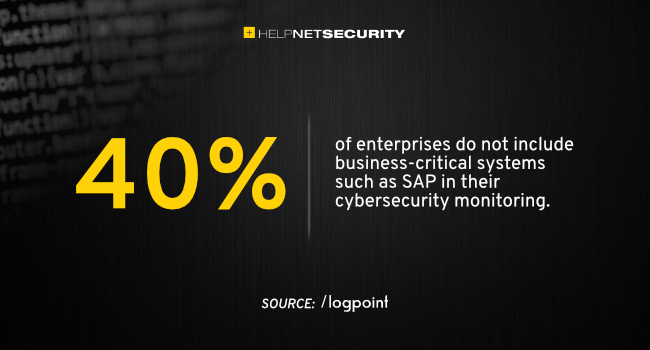 The problem with monitoring of business-critical systems

The poll revealed the extent of insecure and unmonitored business-critical systems, with 40 per cent noting that they do not include business-critical systems such as SAP in their cybersecurity monitoring. In addition, a further 27 per cent were unsure if it was included in their cybersecurity monitoring at all. This is concerning given that SAP serves as the core system behind every aspect of business operations. Not including this in the centralised security monitoring solution leaves organizations vulnerable and exposed to the risk of cyber threats.

“Considering that 77 per cent of global transactions touch a SAP system, protecting it against cyber-attacks is vital. Organizations store their most critical assets within SAP and this data must be protected. SAP systems require extensive protection and security monitoring, and businesses need to ensure they have an integrated security operations platform that monitors all IT infrastructure to ensure they have complete visibility into their SAP system,” said Andrew Lintell, Logpoint VP for EMEA.

Furthermore, when asked how they currently review SAP logs for cybersecurity events or cyberthreat activity, almost 30 per cent of respondents admitted to not reviewing SAP logs in any way, and again, nearly 30 per cent said they didn’t know if this was being monitored. Failure to do so can create a blind spot for businesses and make it challenging to detect and quickly respond to fraud and threats within SAP.

To add to this, only 23 per cent said the process of reviewing SAP logs for cybersecurity events or cyberthreat activity was automated through SIEM, with almost 19 per cent still doing so manually.

“Bringing SAP systems under the remit of cybersecurity solutions can massively reduce the security risks and provide logs to aid any audit processes. Accommodating it within the SIEM, for example, can enable these applications to benefit from automation and continuous monitoring, as well as coordinated threat detection and response with log storage, and log management to assist in subsequent investigations,” commented Lintell.

“The problem though, is that businesses are trying to fill the gaps in their cybersecurity stacks by devoting more spend to a growing litany of cloud security products, with many toolsets and features going unused or resulting in configuration failure and ultimately, data breaches that could be avoided.” Lintell added.

Software licensing in the cloud considered too expensive

For those businesses looking to invest in cloud security, a near 40 per cent of respondents regarded software licensing in the cloud as too expensive, with 24 percent declaring it led to unknown future costs. Lock-in or lack of control with software licensing was also flagged as an issue by 22 percent, along with a lack of user-based licensing options by 14 percent, as the predominant model of charging is data usage-based. The results indicate there’s clearly some appetite for change in the way that cloud-based security services are offered, and businesses stand to benefit from a converged cost-effective form of cyber defence.

Lintell commented – “Businesses must continue to build out their cloud presence and the market is seeing some natural consolidation as complementary technologies such as SIEM and SOAR converge. There are cost effective options available, and a SaaS all-in-one solution can limit the costs associated with licensing, particularly if it’s based on the number of devices sending data, rather than on the volume of your data, which is where businesses are seeing costs escalate”.