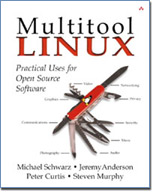 Linux is popular, not to say cool. A free alternative for Windows, Mac OS, and other OS’s. Not long ago, Linux was mainly used by power users for various developing processes, system and network administrators for it’s reliability, curios hackers and hacker wanna-be’s alike. Nowadays, the situation is slightly different. Everyone wants to give it a spin, sooner or later, regardless of the user’s knowledge. All major distributions are now as easy to install and perform basic system setup as any Windows version, not to mention a huge leap in the term of user friendliness. I can already hear old-school admins grunting at this one, but this is a book review not a rant, so leave it for some other more appropriate occasion. But, the real question is, what to do with Linux after you’ve successfully installed it? And, judging by a local linux newsgroup I follow and participate in, such questions arise more often, as the group is literally flooded by novice users asking for help, or pointers to which software to use and for what purpose. If you follow any Usenet group, you know how irritating it can get when people, again usually novice users, ask questions already answered in a message or thread dating one month ago, or so. The general idea of publishing a book that would serve such a purpose, giving example of what to do and how with linux seems like a good idea at this time. So, what we have here is a book that tries to do exactly that. To answer the ‘what next’ question for novice, and all linux users alike. Does it deliver? Read on.

Some tidbits about the authors and book

Multitool linux is written by four authors, M. Schwarz, J. Anderson, P. Curtis, and S. Murphy. As the cover says it, they are all experienced in programming in various developing environments, and have been working on various Unix systems for quite some time now. The book itself spreads on some 500+ pages of useful resources. Was that brief or what? Now, for the book itself…

An interview of three of the four authors of the book is availabe, for their thoughts on the book click here.

To say that this book is packed with useful resources, ideas and pointers would be a heavy understatement. It boasts some 25 chapters, each with its subsections, so you can rest assured it isn’t light bed time reading material. Let’s shed some light on the material in it. As I’ve stated, it consists of 25 chapters, of which 24 are packed with information on various software packages.

The authors have tried to organize it into 3 major parts, the introduction, the toolbox and the afterword. As you already might guess, the introduction deals with some real basics of Linux, such as describing the concepts behind some of the licences (ie, GPL), Linux kernel, reconfiguring it, and such. Not much space is spent on it, as it’s not a linux system administration book.

The real flesh of the book is the toolbox section, which contains all the really useful information in the book. It spreads from chapter 2 to 24, just to give you the idea. Now, what I’d usually do is describe each chapter in brief, but as there are far too many chapters to discuss, I’ll stick with the authors organization of chapters into larger sections. Basic topics of network and communications are covered through chapters 2-9, containing information on subjects like remote control, masquerading, IPChains, even PLIP, Samba, undernets, secure web mail service and such. Surprising eh? Like I said, this is not “Running Linux” or “Linux System Administration Book”, but a book of a different kind.

Next comes in line a section about privacy and security, spreading from chapter 10 – 14, containing such fine things as GPG and email security, sniffing, organising system security using software such as Tripwire, Snort, SSH, and configuring them. Mind you, there are far much better books written solely on system security, so don’t look for too much here, it’s only a section, but a decent one.

Then comes the part with miscellaneous tools described, in chapters 15 – 17. Now, the chapter 15 is a real gem here, as it describes in brief some valuable and irreplaceable tools for Linux, such as Vi, sed, dd, tar, CVS, Perl, various shells, grep, lsof, wget, various mail clients, GUI and non-GUI tools. Every novice user will find it very useful as all major Linux distributions install some or all of these by default, and are a priceless help for any linux user. It is concluded with a list of usefull linux related web sites. This one is a must read, not to be forgotten but used.

The following three sections are a lightweight reading in comparison to others, as they mainly deal with music and audio, graphics of any kind and video. Areas a lot of people work professionally in, and some of them make a living out of it, so it’s a good thing to tag along and read them. You’ll find useful software references and ideas about audio processing, vinyl clean up, mp3’s, various cd burning tools, MIDI, speech synthesis, image processing, the lot.

What do I make of it

This book is intended as a guide for users who already installed their Linux boxes, but are unsure of their possibilities or don’t know what to do with them. As such, it does good. As you can clearly see from the books contents it’s packed with information about all major areas of interest for all sorts of users.

Anyone looking for a book of such subject can safely look here. If you’re looking for one of those “Learn Linux in 24 Hours” or “Running Apache”, look further, or prepare to be disappointed. Luckily, this book doesn’t even try to pretend to be something it’s not, so I must give credit to the authors for clearly stating it at the very beginning of it.

Now, very few, if any, books succeed in desire to be the jack of all trades when it comes to computers. Such is the case here. Even though it’s literally packed with useful information, I can’t really recommend it to a novice or inexperienced user, especially those users with little practical computer knowledge. In my honest opinion, far more knowledge is required to deal with this book and fully understand some of the subjects dealt with, than an average novice Linux user usually possesses. Sure, the authors have tried, but it seems to me that they aimed for the more intermediate users, than novice. I got no problem there, but one must keep in mind that such users already have and use software they need, and are advancing to some other topic that choosing how to encode mp3’s. On the other hand, it deals with some pretty odd but amusing ideas
of using email as a system console. How’s that for an intermediate subject? Definitely.

So, on a scale od 1 – 5 (1 being the lowest possible grade) I can give it a 3.5, but cannot recommend it to novice users, only more intermediate ones. At first sight, it may seem like a book glued together of various unrelated subjects, but when you look into it better you’ll see it’s fairly good organized, but requires some knowledge. As it tries to cover as much various aspects as possible, you have to be prepared to do some extra researching and reading on your own in order to use it to a full extents. But, being a Linux user, that is expected of you, so there’s no need for me to emphasize that fact, right?