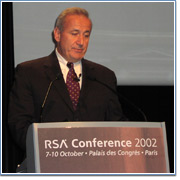 The first day of the RSA Conference is behind us. As we mentioned earlier, Monday was tutorial day and was divided into two areas: developer and enterprise tutorials. The attendance of the first day was satisfying, but as the conference wasn’t oficialy opened, people started checking in today. Today the conference started with a grand opening and keynote by Art Coviello, RSA Security CEO and President.

He started by speaking about the new developments in e-security during this year. The conclusions were the following:

Moving on, Mr. Coviello talked about government news. Interesting points include the following:

The speech went on to focus on hacks and attacks. Mr. Coviello mentioned the increasing problem of computer viruses and mentioned the Slapper worm and Bugbear, both heavily present in the media recently. Hack attacks are on the increase, as always. Also mentioned were the insecurity of the wireless networks, the drive-by hackers, war chalkers and war spammers. 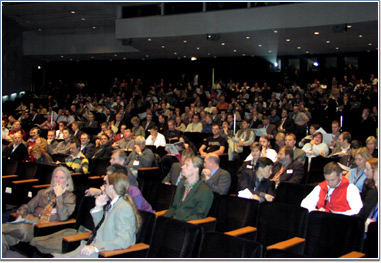 This topic couldn’t be concluded without a bit about hacker arrests and convictions:

“We still have a lot of work” is Art Coviello’s message. The threat is no longer just internal, disgruntled employees are a growing threat. 2002 is set to become the worst year for digital attacks: 80% of the attacks come from 10 countries, utilities are the number one target.