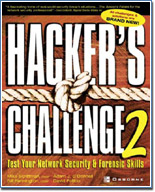 If you are interested in the Information Security industry, you are regulary hit by a lot of news information on the malicious attacks, including denial of service, defacements, stealing sensitive data, social engineering, corporate espionage etc. This book presents the information on how these attacks are achieved and how they can be stopped.

“Hacker’s Challenge 2: Test Your Network Security & Forensic Skills” starts with a suitable quote by William Gibson – “Technologies are morally neuteral until we apply them. It’s only when we use them for good or for evil that they become good or evil”.

Mike Schiffman, CISSP, is the lead author of the original Hacker’s Challenge and has written articles for Software Magazine and SecurityFocus. He is Director of Security Architecture for @stake, the leading provider of professional security services.

Adam J. O’Donnel is a NSF Graduate Research Fellow at Drexel University who consults for the information security industry.

Bill Pennigton has six years of professional experience in information security and 12 years of IT experience. He works at WhiteHatSec, the premiere provider of Web application security services.

David Pollino is Director of Wireless Center of Excellence at @stake. He is a contributing author to the original Hacker’s Challenge and author of Wireless Security from McGraw-Hill/Osborne’s RSA Press.

I read a lot of security focused books which were divided into techie books, hacker/security fiction books and management concentrated books. This publication combines all of these book types, and provides the reader with: a fictional scenario describing the situation, technical data helping the reader understand what happened, test for the reader to try to find out what went wrong and a guide through what really happened with an addition of prevention and mitigation tips.

The book has two parts, each contaning information on the same 20 hacking challenges. The first part presents the information related to the setup of the challenges, while the second part offers solutions and in-depth analysis of the issues covered within each of the challenges. Writing the book this way gives the reader the possibility of brainstorming while trying to understand what happened and what would he/she do in the same situation. This is a good test for the knowledge of network security and forensic skills.

The book opens with a challenge on “Byzantine failure”. This term is used when a node on a network fails not simply by ceasing its operations, but starting to misbehave. Combine this problem with a ficitonal computer security conference and its wireless network, and you’ll end up with the challenge numero uno. The third challenge describes the “Man with one red antenna” and discusses a cab driver wardriving around the town. The authors note several prevention tips including SSID blinding, Mac Address filtering, WEP authentication and External migration. If you are into wireless security these tips will be well known to you, but they will provide a nice overview for wireless beginners. The fifth challenge talks about a company employee that flooded the company’s VLAN, which in the end gave her the possibility of sniffing the traffic that shouldn’t be seen on a switched network.

The sixth challenge talks about an attacker using a “hacked”, default-password-using, Cisco router for the pleasures of flodding other IRC users. The following challenge describes two problems in a fictional company. The problems correlate, as the lack of security policy is connected to the situation where some staffers are installing wireless access points in an un-secure manner. The eight challenge was the toughest one – not because of the hacking theme this chapter was about, but rather because several pages of introductionary text that was based on a geeky techie talk regarding RD amplifiers and Teflon boards 🙂

One of the most interesting challenges was “The slipper NOP slide” where one of the authors described an experience with an 31337 h4x0r on IRC. The author discusses the ways of using an Apache exploit for getting a local account on “target’s” machine and then firing a buffer overflow attack for elevating his privilege. This chapter has one of the best solution descriptions in the book and also offers funny translations of “l33t” talk.

The “Tunnel of love” challenge starts with an overview saying that the attack, prevention and mitigation complexitites are high. It talks about an Internet Services Provider that offers wireless connections in several cities across the USA. Besides its tight configuration, someone managed to connect to the network without authorization and download several Gigabytes of files. Visiting the remote location and using the populat NetStumbler tool showed the consultant what went wrong.

The next challenge, also wireless network related, talks about a network setup at an airport where it is easy to hijack the 802.1x session. Eighteenth challenge goes into the sphere of application security with a little mix of possible extortion scheme. Some of the other challenges talked about the book include man in the middle attacks, social engineering, defacements caused by web server hacks, employees tampering around the network, vulnerable out-of-use computers, spoofing, making company computers into warez nests and hopping through VLANs.

I’m happy to see several wireless security issues presented in this book, as more and more people are ditching the cables in favor of wireless connectivity. As the wireless “revolution” is in the early phases, there are a lot of things future wireless network administrators should look upon.

The first “Hacker’s Challenge” book was a success, as it provided a new scope on the vulnerabilities and ways to exploit them. This sequel isn’t a second edition, but a whole new book detailing with, as always, extremely interesting hacking cases. There is a number of ways to write a security related book, and from my perspective the authors did a great job. By combining both the technical security issues with nifty situation descriptions, they created a book so interesting, that you won’t be able to put it down.

As I see it, security issues are always evolving so in the near future there will be a need for another “Hacker’s Challenge” publication.