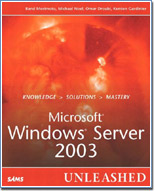 Introducing a new era of computer networking Rand Morimoto and other esteemed authors put their own experience and knowledge in one place. If you are familiar with NT or server technology, or you are not but willing to learn, this book can easily guide you through any problem you wish to solve in the newest server environment.

Rand Morimoto (MCSE), has been in the computer industry for more than 25 years and has authored, co-authored or contributed to more than a dozen books on Windows 2000 Security, Exchange 2000, Biz-Talk Server and Remote and Mobile Computing. Rand is the president of Convergent Computing, an IT-consulting firm in San Francisco. Rand is also a special advisor to the White House on cybersecurity and cyberterrorism.

Michael Noel (MCSE), has been in the computer industry for more then 9 years and has written numerous books on Windows 2000, Exchange 2000 and Microsoft Operations Manager. he is curently a consultant at Convergent Computing in San Francisco.

Omar Droubi (MCSE), has been in computer industry for more then 9 years and has worked as a consultant on technologies and solutions including directory servicies, messaging systems, data basis, worldwide networks and firewalls.

Kenton Gardinier (MCSE), has been in the computer industry for more then 9 years and is an internationally known author of several books on Windows design, Security, performance tuning and Systems menagement. Kenton holds many certifications including MCSE, CISSP and MCSA.

Part one of this book begins with an overview of Windows Server 2003 and .NET technology covering differences and improved features. If you have chosen to implement 2003 core and Active Directory on an existing network, you will ask yourself is it right time to do it and how much it will cost. There are many ways of migrating to the Windows Server 2003. It doesn’t matter if you’re migrating from Windows NT4 or Windows 2000, it’s all covered here. There are four types of sever distributions: Web, Standard, Enterprise and DataCenter. First and most common one is Web edition based on new and affirmating technologies faced to new types of networks and services. It includes multiple improvements in networking security. Microsoft has changed and simplified all tasks related to user administration. Many new standards like wireless are supported here. The authors managed to cope with them by testing the operating system and its behaviour in big corporations.

The most important issue in every big company is taking care of employees/users. In virtual space every employee has his own personal data which can easily create excessive organizational efforts. The solution has been found by Microsoft and it’s called Active Directory. A full understanding of the strucure of Active Directory is vital to the understanding of the Windows server 2003 environment as a whole. This part describes an overwiew of directory services in general and specifically focuses on the overall development of Active Directory as an enterprise directory service.

Windows Server 2003 utilizes the domain name system (DNS) as its primary method of name resolution. Althought not so glamorous, the Dynamic Host Configuration Protocol (DHCP) and the Windows Internet Naming Service (WINS) are critical in a network environment which resides on their functionality. The third part of this book deals with those services, describing their usage in practice. In theory, all of these services have a complex architecture, and is not an easy task to learn to use them. Because of this, the authors wrote something, but it requires much more time to accomplish all tasks to have network configured properly and not to have any problems later by automating processes. Anyway, the quantity of themes and how far the authors went is enough for a quick insight. One of the most important improvements of all in this version of Windows is, for sure, Internet information services v6.0. The last one, version 5.1, included within XPs and 5.0 included within Windows 2000 changed the odds for Microsoft in everlasting fight Microsoft vs. others. Several enhancements have been made to IIS 6.0. These enhancements are not only in .NET technology but also in performance and security. Anyone who was working on it or was programming in ASP will appreciate any improvement it has.

Security, as something of the utmost importance can be the main aspect of migrating to a new version of osftware. Curing standard vulnerabilities, implementing patches and improving global awareness in your company can take up a significant amount of time and money. The fourth part of this book determines several security levels, such as: Server-Level, Transport-Level, Passports and Security Policies. They say that security works best when it is applied in layers. For example: it is much more difficult to rob a house if it has a fence, dogs and security system than just a guard. It sounds very simple but to make this common language, learning the server architecture would be good.

Despite all, the administration and management of a new system is a honorable task to do but only when the migration has been completed successfully. User group and site administration is everyday-work when the system is properly configured. To administer every aspect of the system properly the administrator needs to learn various techniques. One way to administer the system is by using registry and group policies. The administrator can manage almost anything manually through those services, so the authors describe how to automate it by using scripts and other tools via the Microsoft Management Console (MMC). Configuring the system by making mistakes can lead you to a disaster, so in this book you can find all kinds of set-ups and tools descriptions you can use to prepare your network for the worst – using new system recovery technologies and business continuing strategies. The book also includes texts about using third party tools, which can be very useful for administrators with some experience to automate their job and make it easier for any IT professional in network support.

Windows Server 2003 is an operating system based on new technology, and is not correct to name it “.Net server” just because everyone does. To migrate successfully much more time is needed than we expected, especially because many networks are still based on old OS-es and administrators should be re-educated. I think that this book can help you in this task quite successfully.