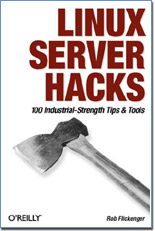 There are a number of system administrators out there that provide a different level of care for their penguin powered server stations. For those wanting to broad their administration horizons, O’Reilly’s “Linux Server Hacks” should come quite handy. This 200+ pages long book doesn’t bother to cover all Linux server administration topics, but provides a collection of 100, sharp to the point, server administration situations, written by a well known figure in the administration world.

Rob Flickenger is the author of two other O’Reilly books: “Building Wireless Community Networks 2/e” and Wireless Hacks. He recently served as sysadmin for the O’Reilly Network, and is currently working on promoting community wireless networking through efforts like FreeNetworks.org and NoCat.net.

Flickenger divided the wealth of Linux hacks into eight separate categories. As the book is all about tips and tricks, I won’t go much deeper into what kind of information is provided within the hacks, but I’ll rather mention some of the most interesting ones as presented in their respective categories.

The book starts with 22 hacks dealing with server basics. Over here the author provides tips helping the admins cleaning on ex-users, hunting the “Disk Hog”, using large amount of RAM (for all of you that want to beef up to 64 GB of RAM in your favorite Linux box) and building more complex command lines.

If you are spending a lot of time with your Linux server, you probably use revision control. Besides providing simple backups, revision control is used for tracking the changes in any file, with some useful options offering the users information on who changed what and why was the change done. If you are not familiar with revision control, the tips wouldn’t be of much interest, but can provide you the introduction on this process and quite possibly make you to consider using something similar. Hacks include tracking changes with rcs2log and CVS usage specifics.

There is always a possibility of system fiasco, so backing-up data is one of the most important processes of our time. The author provides some nice hacks dealing with backing-up data with tar over SSH, archiving with Pax, backing-up your boot sector and automated incremental backups with rsync.

The networking section of “Linux Hacks” contains nine tips, mostly connected to firewalling (iptables) and tunneling. An especially interesting hack inside this section is the one on connecting two networks using user space tunnel server (vtun) and a single SSH connection.

One of the most useful sections inside this book is surely a part containing system monitoring hacks. The author mentions several different tools and some relatively “obscure” switches to the popular tools, which will surely make a number of readers write down some of the examples the author notes.

The next chapter deals with SSH hacks, including: “turbo-mode SSH logins”, using X over SSH and forwarding arbitrary ports over SSH. It is a pity that the flawless physical layout of the book is somewhat ruined over here, as because of the obvious printing error the introduction page on SSH hacks is missing.

The scripting hacks chapter is the shortest one in the book, as it covers just a couple of useful examples. These include the movein.sh script for keeping in sync your local environment on different servers and tips on searching and replacing with Perl.

The final chapter, which is also the largest one, deals with three of the most common information services running on Linux – BIND, MySQL and Apache. All of the 25 hacks presented over here contain a number of extremely useful examples and scenarios which will be of a great use for administrators using these services. The content of this chapter will surely activate your brain cells and make you deploy some of the hacks noted by Flickenger.

I presume that, at least once, you have searched Google trying to find a note on some administration idea you came across and don’t have a clue on how to finalize it. All the massive Linux bibles contain a variety of topics, but nothing so special/complicated like the thing you would like to do. “Linux Server Hacks” contains just that kind of tips – the ones that will help you to become even more productive (from the admin’s point of view), to optimize the time you spend in the terminal and to become a better administrator altogether.

The thing I like about the book, is that on one place you can find a number of useful commands, scripts and ideas, that would either power up your administration skills, or even make you brain storm resulting in combining a couple of hacks for your purposes.

Early in the book, there is a section on getting the console access after you have accidentaly forgot the password. “If you are the administrator”, Flickenger notes, “consider writing the password in invisible ink on a post-it note and sticking it to your screen, or stiching it into your underwear, or maybe even taking up another hobby”. Funny remarks, such as this, can be found throughout the book, which makes the book even more interesting to read.

The bottom line is that the author created a successful Linux server administration cookbook containing 100 “recipes” that any administrator should taste.