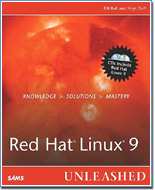 In the beginning there was nothing, and all was empty and raw. And then came the era of the machines, consumer society and commercial Operating Systems. Then only a decade before the 21th century, the end of the Pisces era and the beginning of the Age of Aquarius came Linux. The OS evolved, legend became history and history became myth. Now, we should ask ourselves if we want to be a part of the glorious history, or simply a brick in the SkyNet’s creators mind? Well, don’t be afraid. Read ahead.

Bill Ball is an author, technical writer, and magazine journalist who has worked with Unix since 1989 and Linux since 1994. He has published articles in Linux Journal and has written several successful computer books. He is a member of the Northern Virginia Linux Users Group (NOVALUG)

Hoyt Duff writes about Linux as a columnist and he’s also a regular contributor of reviews and tutorials for Linux Format magazine. He has contributed to the Mandrake documentation as an editor and has edited the English content linuxnetmag.com, a Webzine.

In the first chapter we learn the basics of Linux. What we can expect when dealing with Linux? Is Linux suitable for business or even more is it ready for large corporate businesses? You can understand the true nature of Linux by studying and playing with the RedHat distribution (which has been included with this book). You can find a lot of information regarding the RedHat distribution and everything that comes with it, such as the errata page, updates, manual pages, howto documents, book provided by RedHat, newsgroup etc.

What follows is a discussion of hardware prerequisites for a successful Linux installation. Here the authors introduce various types of installation (custom, personal, server and workstation), potential traps like WinModems, USB connected devices (scanners, webcams), wireless devices and other hardware that can cause problems. There is a nice example of how anyone that wants to be a good sysadmin should create and maintain a table about hardware he/she uses. This spreadsheet can be very useful in avoiding potential problems regarding the installation or maintainance of Red Hat Linux. Finally, we are introduced to Kickstart, an automated installation of Red Hat Linux on many uniform computers.

The third chapter is practically a guide which leads you through the installation of Red Hat 9. There are numerous ways to set up a Linux box. Described in detail is a classic installation via CD without a graphical environment. Also mentioned here are other types of installation like via NFS, HTTP, ISO images etc. We learn here about boot loaders such as GRUB (default) and the older one – LILO.

After you install Red Hat Linux on your computer, you have to configure the hardware devices. That’s the general idea about what we learn in the fourth chapter. Things like configuring the mouse, keyboard, CD/DVD/CD-RW, sound devices, modems, firewire, PCMCIA cards, etc.

Next you are introduced to command line utilities. There is a description of the directory structure as well as the main system files like /etc/fstab, /etc/inittab, files in the /etc/sysconfig directory, and more. Here you find basic information about the virtual console, the logging process, environment variables and working with file permissions. The authors also bring out term editors – the most popular like vi and Emacs.

The sixth chapter covers the philosophy behind the X client/server. Here you learn how to configure X Windows in text and graphical mode in great detail. Mentioned are also the two most popular desktop environments – GNOME and KDE. This chapter is also the end of the first quarter of the book.

The authors move on to write about managing services. Here you learn more about: the Linux boot process and other terms usually connected with the init process, services, runlevels, the inittab file and so on. This is a small but very informative and important chapter.

Chapter 8 discusses managing software and system resources. Here you learn more about what the Red Hat package manager does: install, upgrade, remove and query packages. As we can do this within a text oriented console, we can also do it with a GUI tool such as redhat-config-packages. The book continues with an overview of user and group management and there are also a few words about password management and system quotas.

When writing about filesystem management, the authors explain that Linux supports various filesystems. Here you learn how to create, configure, mount and maintain filesystems. Although Red Hat Linux uses the ext2/3 filesystem as default the authors show you the pros and cons of using other filesystem types like JFS, Reisser and XFS.

And now for my favorite chapter, the one dealing with backing up, restoring and recovery. Since only three thing are sure in this world: taxes, going to the hell or paradise and of course the loss of important data, you are introduced to the importance of performing backups. There is not much philosophy here, first a bit of theory and than many useful examples with different tools: tar, cpio, amanda, etc. Not only that we must protect data in raw sense but also protect on system level – so there is a word about creating boot floppy or CD, backing up MBR etc. This also marks the end of the second part of the book.

The third part of the book covers system services administration and starts off with a chapter dedicate to printing services. Red Hat Linux like others Linux distributions can use the following printing methods: LPR and CUPS. Both are well documented and very well described in this chapter.

The next topic is network connectivity and the authors tend to provide you with the essence of networking today. To start off you learn some networking basics and then the authors move on to present hubs, switches and routers. Introduced are also the DHCP server, Samba and wireless networking. When it comes to DNS, you learn the basics concept behind DNS and the usage of BIND. Naturally there are sentences considering troubleshooting and managing security.

You’re certainly going to connect your Red Hat Linux box online so the authors discuss Internet connectivity. You learn how to connect using a modem, terminal adapter, and other methods. Next you get some information on the Apache web server. After reading this chapter you’ll know the basics of installing, maintaining and working with Apache.

Chapter 17 introduces you to free database services. Here you get an understanding of what a database is and how to configure its basic functionality. The authors present also a comparison of MySQL and PostgreSQL databases. Moving on you learn about securing FTP and configuring sendmail. Throughout the book, the author offers links to resources you can use to complement your knowledge on the presented topics. To close the third part of the book the authors write about configuring a news server, news client, IRC, instant messaging, etc.

The last part of the book starts with an introduction to C/C++ programming tools where you are introduced to make, make install, gcc, rcs and cvs. As regards shell scripting, the authors provide a myriad of programming examples not only in bash but also in the tcsh shell. Try it all – that’s the way to learn the beauty of shell programming. What follows is a chapter dedicated to Perl and one that will show you how to compile the kernel.

The book closes with the discussion of office productivity applications, multimedia applications and using emulators. Read about the DOS emulator (Bochs), Wine (DOS and Windows), WMWare, Win4Lin, Executor (Mac) and the VNC server and viewer.

To be honest, I don’t like books that try to cover all about one complex system such as a new version of Red Hat Linux, although I must admit I did enjoy this book. You get a lot of basic information on rather complex topics such as Apache or Sendmail but that’s enough to get you started. The beauty behind this book is that the authors have put many small, but valuable tips on configuring services or utilities.

Along with the book comes Red Hat Linux 9 so you can install it and try things out while reading the book. I can recommend it to both novice and intermediate users, it’s well worth the money.