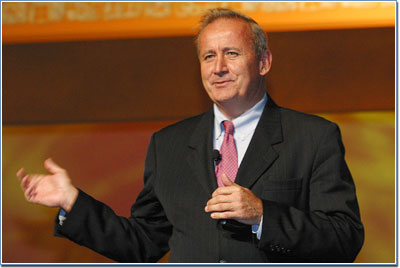 The keynote speech by Art Coviello was preceeded by the performance of the official RSA Conference 2003 band that entertained the crowd with a song that includes lyrics such as:

Had enough of hackers, and network downtime
It ain’t much I’m asking, to keep the bugs at bay
Anna Kournikova – get out of my way!
I want it all and I want it now!

The lyrics managed to send a strong message to the attendees even before the “big boss” of RSA took the floor. We all want our networks to be secure in every aspect and we all want it for the smallest amount of money possible. Are we keeping it safe?

Enters the man himself, Art Coviello, President and CEO of RSA Security, with a speech about the safety of the electronic world. At the beginning Mr. Coviello said: “Despite the great efforts, we have not made sufficient progress to make the Internet a safer place”. He noted that hackers and criminals are getting more sophisticated but it seems that we are catching up, at least with a level security consciousness that is higher than ever before.

Presented was the Internet Insecurity Index which consists of analysis of data security developments over the past year. It manages to give a rough measurement of the problems we’re facing. Because of a higher number of exploits, the number of reported security incidents has doubled. This is not a number we can use to determine the amount of damage though, as there are still many organizations that refuse to report attempted and successful break-ins.

Despite the disappointing numbers, IT budgets are increasing and more companies are hiring IT security professionals to address their needs for higher security.

Viruses are still one of the biggest problems as worms such as Blaster cause havoc with greater speed than ever before.

When it comes to cyber-terrorism, according to Mr. Coviello, this problem is way over hyped and the Internet is much more resilient than we thought it was. There’s been another shift this year as security fears begin to focus on corporate insiders, a category often overlooked in the planning of the security policy.

Mentioned were also privacy fears about biometrics as well as the growing threat of identity theft, costs from which are expected to triple. Mr. Coviello noted the positive actions that have been taken in assuring tougher laws for malicious hackers, laws that send a clear message – crime doesn’t pay.

To end his keynote speech Art Coviello said that he believes the future of the Internet to be very bright, but it won’t happen without adequate security. The message is clear – we need pragmatic solutions.