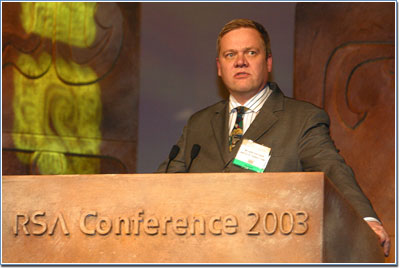 The opening day of this year’s annual RSA Conference Europe event, hosted a ceremony of announcing the winners of inaugural European Information Security Awards. These awards are meant to recognise and reward the most significant achievements in the field of information security across Europe.

In the field of academic research, the award was given to Bart Preneel from Katholieke Universiteit Leuven for project NESSIE (New European Schemes for Signature, Integrity and Encryption). The concept of NESSIE was started in 1999 and, as Mr. Preneel said, the name NESSIE was originated from the phrase “never see it”.

Implementation was rewarded to CDC-Mercure for their e-government project FAST. In his speech, CDC-Mercure Chief Operating Officer thanked all the public and private partners that believed and founded the project and noted that they are starting a new venture the next summer in Germany.

In the European Policy category, there were just two finalists: Ministry of Communications Finland with their National Information Security Strategy project and Sarah Thatcher from London School of Economics with her project titled Public Policy and the Social Construction of Cyber Terror: The Hunt for the Paper Tiger. The award was given to the Finland’s Ministry of Communications. Upon receiving the award, their representative Mr Harri Pursiainen noted that European Information Security Awards are “an excellent way to generate ideas and public awareness for innovations”.

Dr. Burt Kaliski, director of RSA Laboratories and member of the judging panel, said: “We have been delighted with both the quantity and quality of entries received in this first year of the awards. Submissions have been attracted from organisations and individuals across Europe and the content has been wide ranging. The selection process has been a careful effort of assessing which finalists and eventual winners stand out among all the other noteworthy contributors.”