“Invasion of Privacy” is the second book written by Michael J. Weber in three years. His first, “Confessions of an Internet Auction Junkie“, was published by Prima/Random House in October 2000. Weber emphasizes his middle initial — J — to avoid confusion. Another author named Michael Weber writes books about the Civil War.

Weber was introduced to computing in 1979. A couple of years later he began budgeting TV commercials on the first IBM PC and an Apple 2. Weber has been a computer fanatic ever since!

Since your background is not that of a typical computer geek I’m really curious about how you got interested in computer security and online privacy.

Outrage sparked my interest. My last book, “Confessions of an Internet Auction Junkie”, was released during the last gasp of the tech boom. People were quitting their jobs to earn a better living on eBay. Investors were getting rich on tech stocks. Inventors were launching IPO’s from their garages. The Internet was fresh and held so much promise. Spam, viruses, worms, pop-ups ads, were hardly a problem. I’m not talking about ancient history. That was only three years ago!

As my new book explains, there’s a direct corollary between Moore’s Law and the decline in personal privacy. On a bell curve our privacy has decreased at about the same rate the power of the CPU increased. When the tech boom fizzled technology turned malignant! I decided to investigate why and that’s how I came to write “Invasion of Privacy”. I didn’t have the answer but I knew who did; hackers and security experts. That’s how the idea germinated and why I became interested in computer security and privacy.

How long did it take you to write “Invasion of Privacy” and what was it like? Any major difficulties?

The book took nine months to write and three months to edit and publish. That doesn’t include research which began when the tech bubble burst. Writing went smoothly. I had excellent editorial support, as you know. HNS was my tech editor team. My only regret is there are lost chapters. I wrote a chapter on Microsoft and one on the USA Patriot Act that the publisher opted not to include. That’s their prerogative but had I known it would have saved a couple of months of writing. The book looks great and the publisher did a super job. We’re very proud of the result.

Are you satisfied with the feedback you’re getting about the book?

“Invasion of Privacy” was just released so feedback is hard to gauge. My mother likes it! Seriously, we implemented a public relations campaign a few weeks prior to release and the wire service indicates something like 1400 media outlets have expressed interest in the book so far. The problem is I have no idea who they are. I know The New York Times is interested and so is Advertising Age and Tech TV. And of course there’s this interview. I hope Help Net Security’s audience will buy the book. (There’s a groovy photo of Mirko Zorz and Berislav Kucan of HNS inside!)

At this point, you know a whole lot about privacy problems. Do you feel more secure since you’re aware of the threats or do you feel more paranoid about what’s coming next?

I’m not paranoid because I know what’s coming. The future is Digital Rights Management! Technology will remain in a logjam until Silicon Valley can protect Hollywood’s intellectual property. That spells proprietary security schemes like Apple’s MPEG-4 Advanced Audio Coding and Microsoft’s Palladium or whatever they call it. My fear is that Outlook won’t open an e-mail attachment one day because my version of Word is out of date or MusicMatch won’t play a song downloaded from iTunes. Thank God I’m not alone. Hackers and the security community are all over this issue! That’s the ecology of technology. In and of itself DRM is a neutral phenomenon, neither good nor bad. The greatest threat to technology today is the gullibility of average computer users. They’re the reason I wrote “Invasion of Privacy”.

On a more serious note I’m very concerned about the threat of cyber-terrorism. Look no further than the great Power Grid Failure of 2003. If that wasn’t a perfect dry run for terrorists it certainly could have been. President Bush called it a wake-up call. Too bad Bush didn’t heed Richard Clarke, his cyber-security czar, when Clarke expressed concern about the vulnerability of the North American power grid in 2002. The Bush Administration has given lip service to Homeland Security and the fight against terrorism while waging a private war in Iraq for its own personal reasons. That’s the biggest threat to privacy, security, and freedom, I know of!

What are your future plans? Any exciting new projects?

I’m currently writing a screenplay for a well-know director as a change of pace. It’s called The Virgin Hitman and is sort of a cross between Get Shorty meets Some Like It Hot. As for books, I’m toying with the idea of expanding a chapter in Invasion of Privacy called The “Cheap Toothpick” Syndrome. It’s based on a formula I discovered that calculates the cost of mediocrity. Your audience can read The “Cheap Toothpick” Syndrome and other chapters on the “Invasion of Privacy” website. 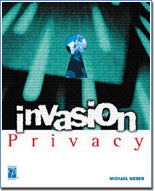 This book is about people; people who do good and evil things with technology, people who are victims of technology, and victims who become avengers by turning the tables on the technology that victimizes them.

You’ll meet Steve Kirsch, a Silicon Valley multimillionaire who sued the company that inundated him with junk faxes for $2.2 trillion dollars. You’ll meet Jason Eric Smith, a struggling college student who set up a sting worthy of Paul Newman and Robert Redford when a con artist ripped-off his Apple PowerBook in an eBay auction.

I sought input from leading experts in the fields of computer security and privacy like George Kurtz, Steve Gibson, Ron Kessler, and Michael Froomkin to provide you with practical steps you can take to protect your privacy, your personal information, and yourself.