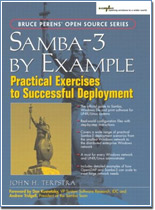 Samba-3 is a Windows file and print software for UNIX/Linux systems. The Samba project aims to “open Windows to a wider world”. This book represents a practical guide with a lot of exercises that will help one to successfully deploy Samba-3. It’s aimed at administrators with step-by-step instructions and real-world scenarios. By reading the following text, you will find a few reasons why this book is a must-have for every Windows and UNIX/Linux network administrator.

John H. Terpstra is a long-time member of the Samba Team, a loose-knit group of about 30 people who contribute regularly to Samba. He co-authored “The Official Samba-3 HOWTO and Reference Guide”.

To provide good guidance for a Samba deployment, the book starts with a networking primer. Terpstra brings resource requirements, exercises and comments for examination of network traces for a Windows 9x/Me client. Each exercise is followed by numerated steps. After the task assignment, a discussion is brought forward, and at the end you find a conclusion. FAQs highlight important aspects of Microsoft Windows Networking so that the configuration of Samba-3 can be a simple task.

The following chapter is a real cookbook for Samba deployment through three simple, yet effective network environments. It covers a charity administration office, a drafting office, and an accounting office. Each of these scenarios is described in details and the chapter ends with an implementation process. I find this approach for interpretation of Samba deployment is very simple, and very effective for users.

Small office networking is the next step of knowledge-building towards a successful Samba deployment. The assignment task of the third chapter is a network comprised of 52 clients where the administrator needs scalability, mobile computing, and easier administration. Here you learn how to implement a domain security environment. The author explains some technical issues as well as the implementation process, complemented with some script example and validation steps.

What follows next is a chapter dedicated to secure office networking. Here you meet some basic features that are specific to Samba-3. The assignment task of this chapter is to implement Internet services. The presented scenario is complemented with a discussion, technical issues, hardware requirements, implementation, etc. The implementation process is described through 5 steps of configuration (basic system, Samba, DHCP and DNS Server, printer and process startup) and 1 step of validation.

Now things become interesting as Terpstra moves on to discuss a 500-user office. The author is focused on the implementation of a more complex print process intelligence for administrators and making easier for the user. The implementation process includes the installation of DHCP, DNS, and Samba control files, server preparations that can apply to all servers, specific server preparation, and process startup configuration. You can view the procedure for a desktop client configuration.

Making users happy is a heavy task for all administrators as every problem can potentially result with anger and frustration. The next chapter deals with some issues that can resolve users’ problem. You will learn how to implement Samba BDCs and how to configure LDAP. The text is full of examples and scripts through which one can learn a specific configuration.

Moving on the author explains Samba deployment into a distributed 2000 user network where Samba-3 is used as a Domain Controller. The implementation of an LDAP server is discussed. One can take a look at three areas that have to be addressed: user needs, Windows networking protocols and identity management infrastructure needs.

The following chapter explains the migration of NT4 domain to Samba-3. Factors that have to be met include: migration of data to another server, migration of network environment controls (group policies), and migration of the users, groups, and computer accounts. By reading this chapter you can learn how the mentioned factors can become a part of the migration process.

Terpstra continues by presenting a few facts one should deal with before the integration of UNIX/Linux servers into a Windows networking environment. Also, it is necessary to recognize where the interdependencies between the various services to be used are. This chapter demonstrates how to implement the technology through the context of what type of services needs must be fulfilled.

As we move on you encounter a chapter that deals with some negative opinion and criticism brought about Samba-3. The topics covered here are: user and group controls, security, cryptographic controls, etc. The implementation process explains how to set up share controls, share point directory and file permissions, and how to manage Windows 2000/XP Access Control Lists.

Chapter eleven deals with Samba-supported services in a domain controlled by the latest Windows authentication technologies. The key points discussed here are: Internet access, distributed systems to accommodate the load and geographical distribution of users, and transparent interoperability with the existing Active Directory domain.

The book closes with guidelines for reliable Samba operations. It also wraps up the theme and contents of a book.

Appendix A is a collection of useful bits of information that can be helpful in a process for joining a Windows client to a Samba-controlled Windows domain. Appendix B is the GNU general public license.

This book includes CD-ROM that is organized just as the chapters in the book. The CD-ROM contains the binaries for Samba 3.02, (for SuSE and Fedora Core 1), all example configuration files, scripts, and tools covered in the book. It can be used on UNIX/Linux systems.

“Samba-3 by Example” is a cookbook you’ve been searching for. That is a slogan. And it is a fact. If you use Samba or you think of using it, this book is something you are going to need.

It is not a classical guide with a lot of theory. It doesn’t include installation techniques. A content of this book is very simple and very effective. You have a problem and you have a solution by example. Each chapter is one level up and it builds the user’s knowledge of Samba deployment through a variety of network environments. Also, it is a guide to many Samba-3 features and capabilities in real world scenarios.

There are many positive prospects of this book, and one of them lies in political issues that are mentioned in every chapter and helps administrators to deal with problematic situation in every organization – how to implement new solution without disapprove and frustrate users.

Every administrator can learn to deploy Samba by reading these examples and ideas. Book can save them a lot of time, and help to find their own solutions with learned key points.