Enterprise requirements for business-continuity and disaster-recovery solutions continue to grow more demanding. An example can be found in the drive to lengthen the distances between primary and secondary data centers. Seeking greater protection for a widening range of increasingly severe disasters, enterprises have pushed technology vendors to support steadily longer distances – now reaching up to 200 km.

All-optical Raman amplification supports network-architecture strategies that meet these enterprise requirements while providing opportunities for lowering network capital and operations expenses. It’s a new role for the technology. Distinguished from Erbium-based amplification in that it does not require doping of optical fiber, Raman amplification is compatible with the enterprise’s or managed service provider’s already installed base of single-mode fiber and supports superior transmission characteristics and longer span lengths. Once primarily utilized in addressing cost issues in service provider long-haul networks and submarine systems, Raman amplification today can be cost-effectively deployed to support single-span transmission at 10Gbit/s over distances of 200 km in enterprise networks. Depending on the length of a given fiber span, this eliminates or reduces the necessity of huts needed to house in-line amplifiers, as well as the maintenance burden and security concerns that are associated with such facilities.

A greater awareness of the cost of network downtime and a need for more flexible operational models have driven a wider array of enterprises than ever to implement sophisticated storage services. But perhaps the biggest driver of all behind the trend is regulatory pressure. Government regulations such as the Health Insurance Portability and Accountability Act of 1996 (HIPAA) and the U.S. Security and Exchange Commission’s rule on Retention of Records Relevant to Audits and Reviews are stipulating precisely how enterprises in more and more industries archive and safeguard data.

In the most demanding scenarios, enterprises require synchronous applications such as Continuous Data Protection (CDP). In this emerging application, disk technologies steadily record data updates in real time. Data is simultaneously written to disk at primary and secondary data centers – and time-stamped. In this way, CDP delivers the unprecedented capability for an enterprise to revert to data at any point in time, instead of a snapshot of data recorded on a preset interval (every four hours, for example).

WDM-enhanced fiber-optic networks – delivering protocol-agnostic, robust connectivity and reliable service – have emerged as the standard medium for CDP and other types of synchronous, business-continuity and disaster-recovery services. The rollout of Dense WDM (DWDM), Coarse WDM (CWDM) and hybrid CWDM/DWDM platforms has made it cost-effective for more enterprises to implement sophisticated storage capabilities. These innovations allow the enterprise to deploy only the precise amount of capabilities they require for their Recovery Time and Recovery Point Objectives (RTOs and RPOs) of the given moment – and affordably add traffic channels and bandwidth as new needs arise.

Optical networks support data transmission over thousands of kilometers, but amplification is necessary along the fiber path. Enterprises have typically deployed in-line Erbium-doped fiber amplifiers in their networks for this job. But locating Erbium-doped amplifiers along an optical link introduces security concerns; plus, there are CAPEX, EFI&T and OAM expenses incurred with each hut that must be located to house an amplifier.

Eliminating – or, at least, reducing the number of – amplifier sites needed to drive application traffic across an optical link would not only cut an enterprise’s costs, it also would greatly enhance the enterprise’s disaster-recovery and business-continuity capabilities (Figure 1). By enabling longer fiber spans, the enterprise would be able to locate primary and backup data centers farther apart and still support bandwidth-intensive, real-time services such as synchronous data mirroring. The survivability of the data mirror in the event of a business-threatening event would be increased. 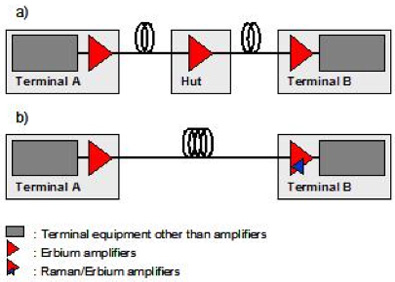 A New Role for a Proven Technology

Service providers have relied on all-optical Raman amplification for years, especially in submarine systems. Today, the technology has matured to the point that enterprises, too, can cost-effectively employ Raman amplification. And the benefits are particularly compelling in the context of synchronous storage applications. 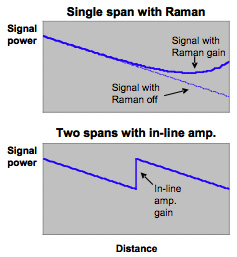 With Raman amplification employed, synchronous storage applications of speeds up to 10Gbit/s can be supported across distances of 200 km. Because it relies on the optical fiber as a medium for amplification, Raman amplification does not require doping of the fiber. This means that Raman amplification can be performed on an enterprise’s or managed service provider’s already-installed base of single-mode fiber. And eliminating the amplifier sites necessary in Erbium-based amplification slashes costs, improves transmission characteristics, abstracts away security concerns and increases survivability of a data mirror by allowing longer optical links between storage data vaults.

Amplification also can be based on a combination of Raman scattering and in-line Erbium-doped amplifiers. High-performance, hybrid Raman/Erbium amplifiers are emerging that enable asynchronous storage applications to be supported over even longer distances. Fewer amplifier huts are needed than if Erbium-based amplification alone was used, and the enterprise’s CAPEX, EFI&T and OAM costs are cut accordingly.

The cost savings to be realized in reducing or eliminating amplifier hut sites should not be underestimated. CAPEX, EFI&T and OAM burden all stand to be cut. Consider, too, that leased office space may run an enterprise as much as $1,000 to $2,000 per month when power and air conditioning are included. Elimination of just a single mid-span amplification site along a 200-kilometer link could save the enterprise up to $100,000 over a five-year period. The economic argument for Raman amplification in enterprise networking is strong.

In context of storage services, the ability to lengthen the distance between data vaults rates is an even more compelling benefit. To gain the protection they want (and governments more and more frequently require), enterprises must be able to put more distance between their primary and backup data centers. Raman amplification cost-effectively delivers that capability.