PandaLabs, Panda Software’s virus detection laboratories, will shortly be publishing a new report on the evolution of malicious code. The report will reveal, among other developments, how the number of Trojans detected by the laboratory has increased.

A Trojan is a particularly dangerous type of malicious code as it stays on an operating system and carries out a series of actions without users realizing. At the moment, and due to the new malware dynamic, the majority of these Trojans are used for stealing passwords used to log into financial services. 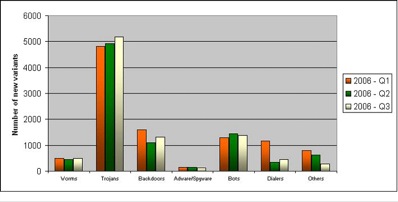 The next group of malicious code most frequently detected by PandaLabs are bots (from the word “robot”) and then backdoor Trojans, which can allow users’ systems to be used fraudulently. These two types of malware, even though they are also numerous, are far less prevalent than Trojans and have either remained stable or decreased in 2006.

According to Luis Corrons, Director of PandaLabs, this increase in the number of Trojans “underlines how the sole aim of malware creators is to profit from their efforts, rather than to gain notoriety as was the case in the past”. Panda Software’s systems for detecting malicious code, with its proprietary TruPreventTM Technologies, can also detect previously unidentified threats, whether they are viruses, worms, or as in this case, any of the numerous new Trojans that are continually appearing.”