Mac software developer Mireth Technology has released version 4.0 of NetShred X, its easy to use internet track eraser that erases internet tracks such as cache, history and email. NetShred X is a Universal Binary, so it works on both Power PC and Intel Macs. 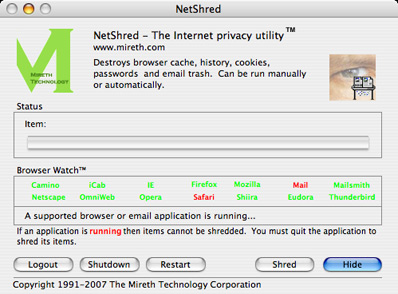 NetShred X is easy to use internet track eraser software for Mac OS X that erases files web browsers and email programs leave behind. Since erasing temporary internet files can take some time, NetShred X was designed to run in the background, so using the software doesn’t interfere with the user’s web browsing. Most importantly, NetShred X is an effective method of permanently deleting internet tracks. This is a cleaner solution than just deleting the files, because it ensures that the data can’t be recovered.

This version adds the following features: