ElcomSoft released Advanced Office Password Recovery (AOPR) 4.0 which allows business managers, information technology support administrators, and law enforcement officials of instantly recovering passwords for a wide range of Microsoft’s business and office applications, including all components of MS Office, from the very first DOS versions to Office 2007 programs, including the ones for Windows, Mac, Pocket PC and localized versions. More than 30 different types of password encryption methods are supported. In addition to unlocking the file “open” passwords, version 4.0 gives you access to all Office Suite passwords, from Word document “save” protection to Excel workbook and sheet passwords. 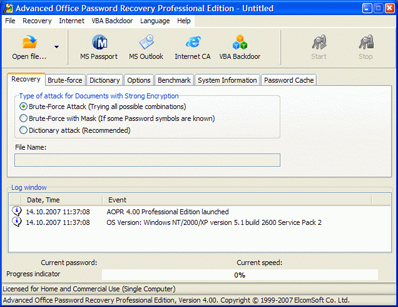 The main advantage of AOPR is that this program uses a smart approach to restoring so-called strong passwords. First, the program scans the password cache and uses a preliminary attack method, which results in recovering passwords for 60% of all protected documents instantly (while these documents are being loaded), or in a matter of a few minutes.

Since most people use simple, unsophisticated, easy-to-remember passwords, this approach saves a significant amount of time. For the rest of the documents, AOPR uses a combination of dictionary/brute-force attacks with ElcomSoft’s proprietary decryption algorithms, optimized for most modern processors.

Microsoft Office document security has been enhanced considerably in its 2007 version. The encryption information block is the same as in Office XP/2003, but Office 2007 always uses AES encryption, the strongest industry-standard algorithm available, with 128 bit key and SHA-1 hashing. AOPR is specially designed to deal with Office Suite’s enhanced security.

In addition to being extremely fast, AOPR is very conservative of system resources and is remarkably easy, very user-friendly, and comes with a wealth of customization options especially designed for encryption and PC forensics specialists.