It should be noted, however, that the nature of spam and its distribution on the Internet pres- ents challenges in identifying the location of the people sending it. Many spammers redirect attention away from their actual geographic location. In an attempt to bypass DNS block lists, they use Trojans to relay email, allowing them to send spam from sites in different geographic locations. Therefore, the region in which spam originated may not always correspond with the region in which the spammers are located. 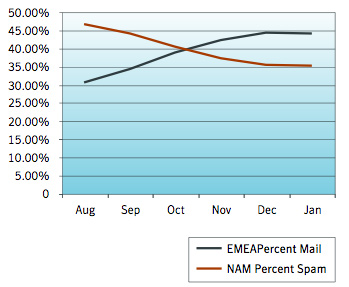 This sizeable increase in spam appearing to originate from Europe is significant but not alto- gether surprising when you consider the massive growth of broadband users in Europe in the last few years. The OECD report published June 2007 notes that while the United States has the highest number of broadband users at 66 million, Europe holds six out of the top ten coun- tries for broadband users in the world. This phenomenal growth in percent spam originating in Europe may also be considered when you look at countries ranked by broadband subscribers per 100 inhabitants – European countries take eight of the top ten places.