SCP and the underlying SSH2 protocol implementation in OpenSSH is network performance limited by statically defined internal flow control buffers. These buffers often end up acting as a bottleneck for network throughput of SCP, especially on long and high bandwith network links. Modifying the ssh code to allow the buffers to be defined at run time eliminates this bottleneck. 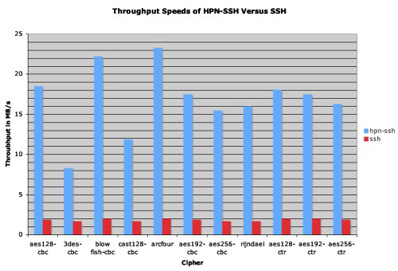 The amount of improvement any specific user will see is dependent on a number of issues. Transfer rates cannot exceed the capacity of the network nor the throughput of the I/O subsystem including the disk and memory speed. The improvement will also be highly influenced by the capacity of the processor to perform the encryption and decryption. Less computational expensive ciphers will often provide better throughput than more complex ciphers. Read more.