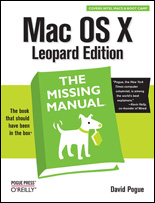 Immediately after its release, Mac OS X Leopard became a big hit. Apple sold 2 million copies of the innovative operating system in the first weekend alone. With more than 300 new features and a polished UI, there’s a lot to explore.

Without missing a beat, O’Reilly soon released this book that aims to help users of all levels of knowledge get the best out of Leopard. Read on to find out what it offers.

David Pogue is one of America’s best-selling how-to authors, with nearly 3 million books in print. David is the creator of the Missing Manual series and the weekly computer columnist for The New York Times.

At almost 900 pages, this book covers basically everything you’d like to do with your Mac – from working with Spotlight to accessing remote machines with SSH.

Despite the immense amount of data, the clever use of typography, the screenshots and a clear layout make the publication painless to browse.

If you don’t mind the size and weight and you have space on your desk, this book can serve as a perfect reference guide. Believe me, once you get your hands on it, you won’t put it on a bookshelf until you’re done.

To make things even more interesting, Pogue doesn’t just offer insight on a myriad of utilities that come with Leopard, but also suggests third-party software titles every user could find useful. This enables a reader new to the Mac platform to go beyond Apple’s offerings and complement his workload with some tools he may not have heard about before.

David Pogue is a synonym for excellence. Every single book I’ve read by this prolific IT author has been time spent wisely. Therefore, it’s not a surprise that I’ve found “Mac OS X Leopard: The Missing Manual” to be an outstanding title that deals with many of Leopard’s complexities.

It doesn’t matter if you’re an experienced user or a switcher that only recently discovered Mac OS X, there’s something in this book for everyone. Starting from Leopard’s new features to more complex topics such as UNIX utilities.

If you’re wondering what would it be like to do almost anything with your installation of Mac OS X 10.5, stop thinking about it and get this book. Soon, you’ll be doing it.